Well-known Selwyn farmer Gavin King was killed on Friday after being trapped by a tree he was cutting.

The tree had blown over in the strong winds which ravaged the Darfield area earlier this month. Firefighters and an emergency helicopter were called to Windwhistle Rd, Glenroy, just before 11.30am and found King trapped under the tree in a paddock.

A week before his death, the Darfield High School old boy spoke to reporter Susan Sandys about his love of mountain climbing, farming and the decision to either conquer Mt Everest or strive towards farm ownership. He chose the latter. 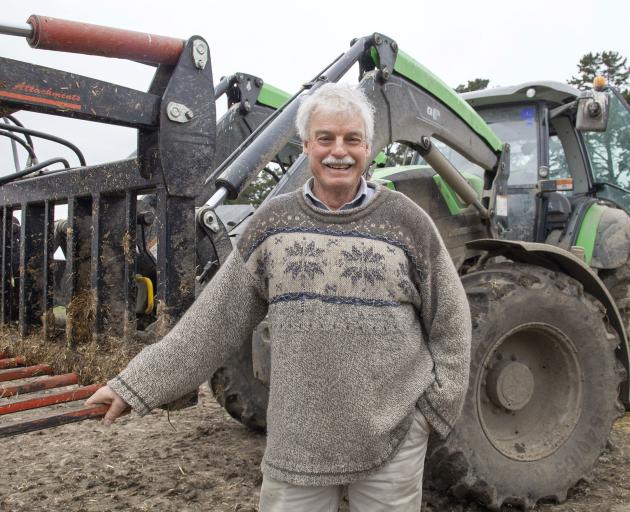 Gavin King started small but built up a large family farming enterprise. Photo: Geoff Sloan
Tell me about your mountain climbing years
When I was at Darfield High School I became very interested in mountaineering from the age of 14. I would get my pack, load it up with my climbing gear, two or three changes of clothes, a little bit of food. I didn’t have much money, I would hitch down from our family farm at Hororata to Mt Cook. You wouldn’t let your kids do it today. I would just find my own way, then I would team up with my friends when I got down there. My father used to take me shooting and to do a little bit of tramping. I was keen to do mountaineering because I liked the snow and the ice. I climbed until I was 16 and then I got into working on farms. I wanted to concentrate on that.

What mountains did you climb?
I climbed the 10,000 footers in the Mt Cook area. I climbed the Minarets twin peaks, Mt Elie de Beaumont and Malte Brun, they are over 10,000 feet. I went over the cheval ridge on Malte Brun, that is a famous part of climbing in Mt Cook National Park. The rock ridge comes to a point, and you just sit on your bum and have a leg each side. It looks like it’s a 3000 or 4000 foot drop below you.

Who did you go climbing with?
My friend David Waghorn, also from Darfield High School. He was in the year above me and we were both in the first XV. He and I were interested in climbing and then we got to know other climbers, Fraser Ford and Kevin Carroll. They both died in climbing accidents.

How terrible to lose your friends at such a young age. What happened?
Fraser Ford, he was 17. He was incredibly unlucky. He died on Mt Cook, a big rock hit him near the top of Summit Rocks and he was killed. I was 15 at the time. I had come back up here to help cart hay and do a few things and then Fraser died. Kevin used to come up to the farm and stay on the weekends occasionally. He was about two or three years older than me. When he was 21 he died on Mt Fitz Roy in Patagonia, South America. They call it the needle in the sky. Kevin was one of two Kiwis who set out from the glacier with two Americans, after four days they hadn’t reached the top. Kevin was 21, so it’s going back a long time. Kevin and one of the Americans kept going, the other two went back down to camp. Kevin and the American were last seen alive just below the summit disappearing into the cloud, the weather changed very quickly. They never came back to camp so after a couple of days the other guys went back. They found Kevin and his friend both dead on the glacier wrapped up in climbing ropes. They had fallen a long way, spinning and the rope winding them up. They could only take one body back down to the camp at a time, and they put Kevin in a crevasse so the condors wouldn’t eat him. When they went back to get Kevin the crevasse had closed up they couldn’t get him out.

In later years I lost another former climbing friend, Paul Skaife. Paul was a really good guy, he became a mountain guide based down in Wanaka. He had climbed Mt Cook 37 times when in 2004 he was taking a climb up the east face of the Tasman. This freak avalanche came down the east face and killed Paul and three other guys. I mean, that is just how unlucky you can be.

Did you ever have any close calls yourself?
When I was 15, another climber Murray Cullen and myself went from Mt Cook village to the Empress Hut. It was one of the highest huts, it’s a long way, about 22km. We went up and back in a day, climbing about 6000 vertical feet. I was nearly killed that day. We were dropping down a moraine wall onto the Hooker Glacier. The whole moraine wall crumbled around me, huge boulders about 1m x 1m. But it only went for a few seconds otherwise I would have been buried. Climbing was really dangerous. I had two or three really close calls. If I had kept going I would have died. 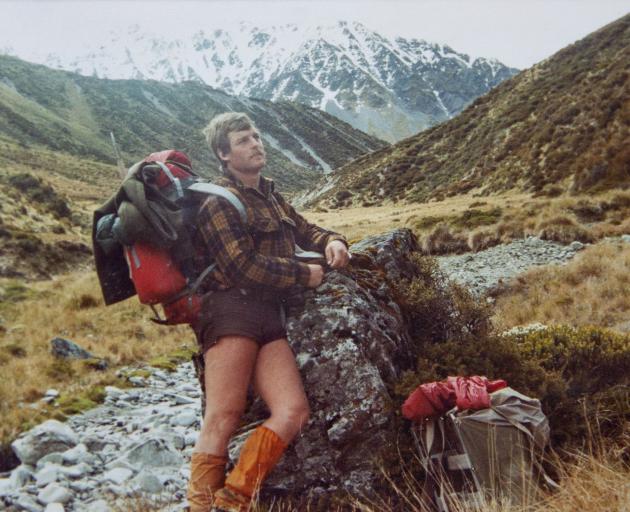 Gavin King at the Wilberforce River in the Southern Alps during the 1980s. Photo: Supplied
Is that why you gave up mountain climbing?
No, I set my sights on getting a farm. My goal was to really either climb Mt Everest or own a few farms, there’s no money in climbing so I gave up.

So you focused all that energy you had for climbing into farming instead?
Yes. I left school when I was 17, I had a brain but I didn’t use it academically. I was born a practical person. When I left school I worked as a labourer for Downers in the Lake Coleridge tunnel, and lived in the construction camp there. Then I worked on a farm in Te Pirita. About 18 months later I went back to the family farm. I worked there and did a little bit of casual work as well. I didn’t really have much money, but my parents sold me their farm, 480 acres. I was 23, pretty young really. I borrowed quite a lot of money. My parents then went to the Marlborough Sounds, they were one of the early mussel farmers there. My wife Leigh and I got married and we carried on farming.

That was a leap of faith to borrow most of the money to buy the farm?
My father thought I would go bankrupt, but I didn’t. Because in his eyes I borrowed too much money. But the way I saw it, I had nothing, so I had nothing to lose.

How did your farming operation grow from there?
I bought more land neighbouring the farm. I bought 250 acres in 1988. This is interesting – when I was younger I always wanted to own a 300D Mercedes-Benz and they cost $150,000. I borrowed the money and I bought 250 acres for $100,000. Today that land is worth 12 or 13 of those cars. That shows you that land is a better investment than a car. The land would be worth about $2.5 million today. You have to pay the interest, but land is a good investment. Then in 1998 I bought another 230 acres across the Hororata river. I paid just under $300,000. Then in 2001, I purchased 700 acres on Rockwood Rd called Shelterdale. I used to do a bit of contract hay baling and I had come to Shelterdale doing baling occasionally. I could see it was a really good place. I thought if it ever came on the market I would try and buy it, I was lucky enough to get it. We are still here on that same farm today. From there we purchased more land.

Did you build a new home at Shelterdale?
Yes, it had an old house. We were going to do it up, but we knocked it down and built a new house - a wise move because the price of building in 20 years it’s probably three or four times what it was. 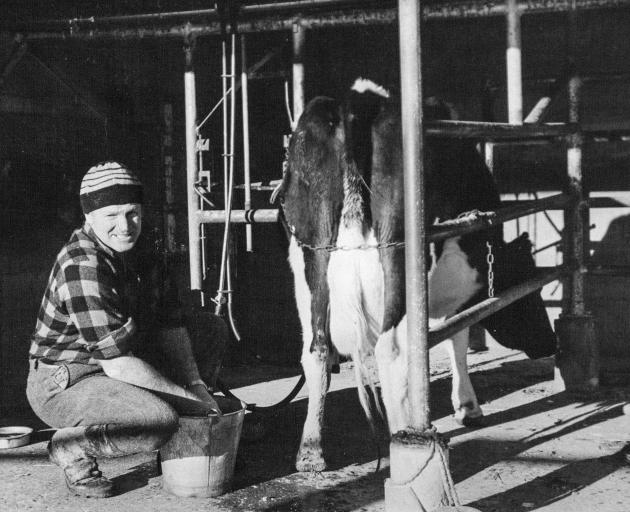 Gavin King’s father Louis milks the family cow on their Hororata farm in the 1970s. Photo: Supplied
Do you still farm the property?
I’m semi-retired. We sold the main part of Shelterdale to our oldest son Fraser (40), he’s leasing the balance of the land. So I started out as a boy and now I’m just a boy again. We also sold a nearby farm to our second oldest son Dougal (37). He converted it and milks 1300 cows. Our other son Angus (34) is a geologist at the Red Dog Mine, in Alaska.

So you have gone from buying the modest family property to a bit of a family farming empire?
Sort of, yes. I sold the original family farm when I bought Shelterdale. The total area farmed by the family is about 3700 acres, on four different properties between Hororata and Windwhistle.

Will you retire off Shelterdale one day?
We possibly will, but the grandkids are just down the road, Dougal’s and Fraser’s kids. If we moved away, we wouldn’t see the grandkids as much.

So I guess you have more than met your teenage goal?
Yes. Mountain climbers have goals, they have to get to the top. Every year we have a Lincoln Uni class come up here. I say to them – in our life you must have goals, if you have no goals you will go nowhere. Even if a goal seems unrealistic, you will be surprised how far you get along to achieving it.