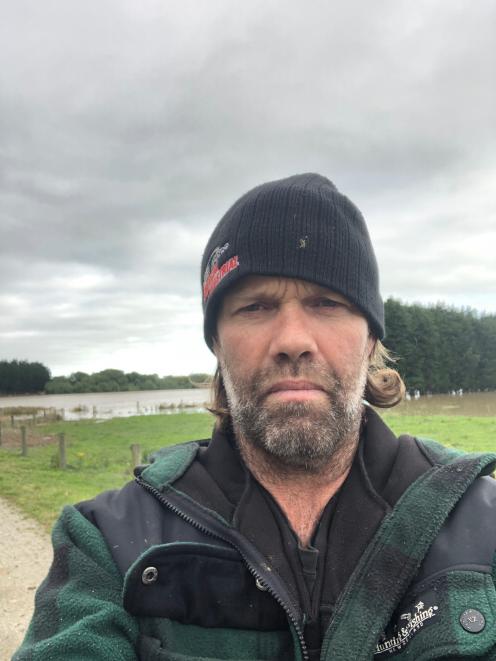 Mr Macvey and his wife, Debbie, contract milk three dairy farms at Mataura Island. The area is located close to the east bank of the lower reaches of the Mataura River.

As the water level continued to rise early last week, Mr Macvey said the main priority was to get his staff and their families evacuated.

‘‘I picked them up in the tractor and got them out to the road where they got picked up by family and friends.’’

By midnight Wednesday he and Mrs Macvey realised the situation was getting worse, and they shifted 600 cows to higher ground and 50 cows to around their house, which was still sitting out of water, ‘‘but only just’’.

The floodwaters sat between the farms’ main milking shed and the cows at higher ground, and Mr Macvey was also cut off from the main mob. Fortunately there is a smaller milking shed on that part of the farm and the farm owner milked around 700 cows through the 24-a-side herringbone.

With no tanker access to the farm, the milk vat had been drained once when Southern Rural Life spoke to Mr Macvey late last week and it would need to be drained again, but they would still be paid for it by Fonterra, he said.

‘‘Now we’re just in clean up mode and trying to get the cows back on track.’’

It has been a tough couple of years for the Macveys. This is the second flood to hit the farm in two years. The couple also suffered a major car accident in 2018 which left both seriously injured.

‘‘Then we’ve just had six months of cold, wet weather, we had only just managed to get crops in the ground when the rain came.

‘‘People don’t understand it, unless they’re in it. But it’s just the way the cookie crumbles, I guess, and you’ve just got to get on with it.’’

The couple plan to finish the season at Mataura and move north to Ashburton to be closer to family.

‘‘We will finish with contract milking for the time being.

‘‘We both just need a break from thinking about cows and staff 24 hours a day, 7 days a week.

‘‘I am looking forward to a nice big holiday and relaxing for a change,’’ he said.