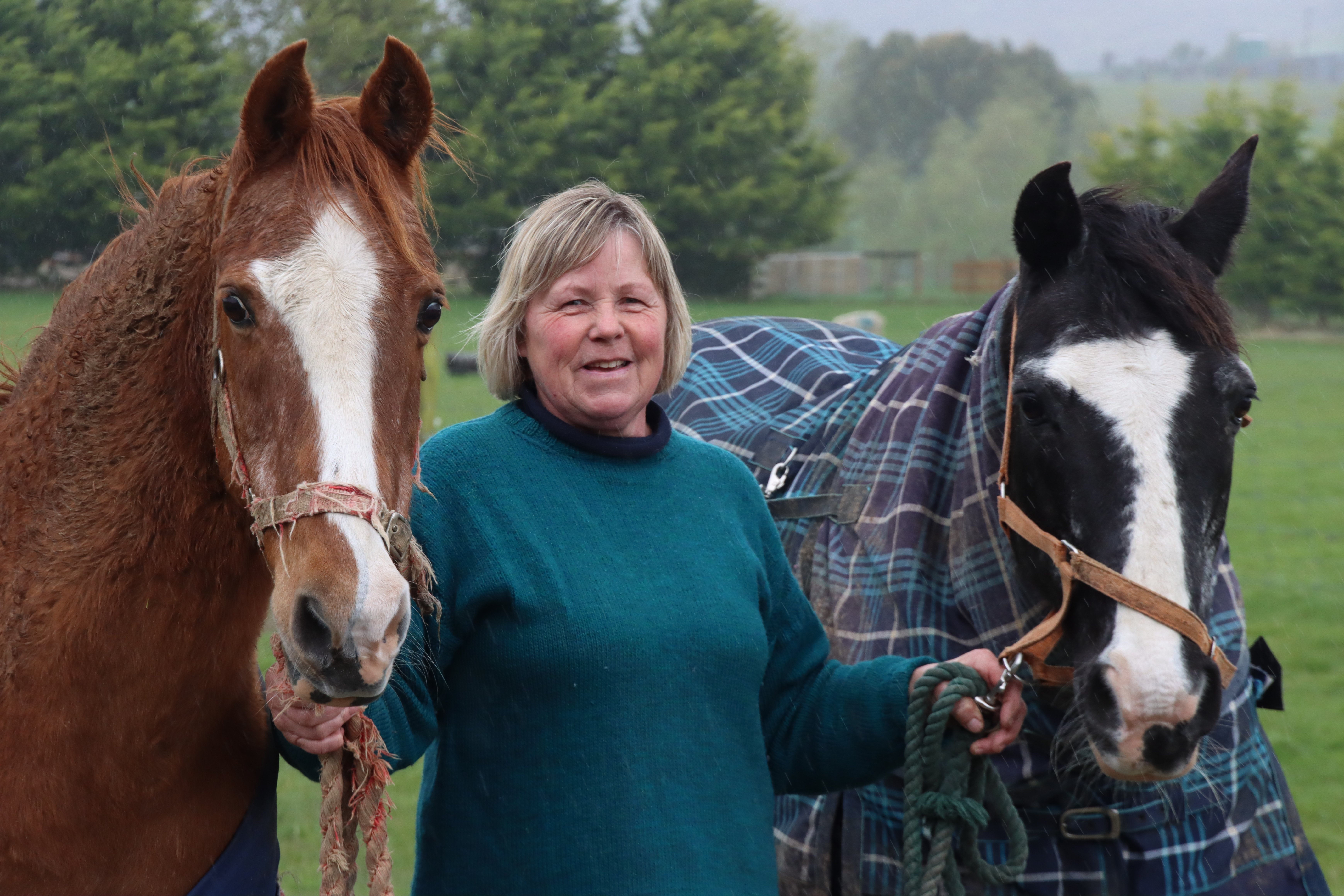 Gore woman Jane Allen says her horses Jimmy (left) and Jeremy were very compassionate during the time she was being treated for breast cancer. PHOTO: SANDY EGGLESTON
As Breast Cancer Awareness Month comes to an end, reporter Sandy Eggleston talks to Jane Allen about her journey with the disease.

Gore woman Jane Allen lives with the sense there is a monkey on her shoulder, but she does not let it dictate the way she lives.

In August 2012, Mrs Allen received an all-clear from a routine mammogram but about a year later was diagnosed with advanced aggressive late stage 3 breast cancer.

Eight years on, Mrs Allen said she continued to live each day as if it was her last, which had always been her philosophy.

‘‘I am really mindful there is a monkey on my shoulder and it could be back tomorrow but I don’t let that stop me from living.

She likened the diagnosis to ‘‘winning a competition that you didn’t actually enter’’.

However, unlike winning a competition, there was nothing good about the prize nor the surprise, she said.

While working with some young ponies, her arm brushed against her breast and she wondered if she felt a lump there.

At the time she was working at Pukerau School.

When Mrs Allen mentioned the matter to principal Colleen Watt, Mrs Watt advised her to go to the doctor.

She went to the doctor and was referred to surgeon Paul Sampson at Southland Hospital, who organised tests.

After her diagnosis she was told if it had spread throughout her body, there would be no point operating.

The lump had grown from fingernail-size to golf ball-size in about six weeks and was now in the lymph glands.

Her left breast and 29 lymph nodes were removed just before Christmas.

‘‘Sampson said I’ve got everything a scalpel can get. He was really thorough.’’

Six of the nodes were cancerous.

In the new year she had chemotherapy followed by radiation.

‘‘I lost my appetite for chocolate which was a real disaster.’’

During chemotherapy her hair started to fall out, so she got her head shaved at the hairdresser and wore a wig home.

She sat down on a chair and the dog jumped up on her knee.

When she spoke the dog was startled and started barking.

‘‘He was horrified. He knew it was my voice but he couldn’t see it was me.’’

She took the wig off and never wore it again, preferring a hat.

Her horses also knew something was not right.

‘‘They were compassionate and they weren’t pushy.’’

She kept working at Pukerau School four mornings a week.

‘‘That was my motivation to get out of bed.’’

Her oncologist told her by having all the treatment available she had given herself the best chance of surviving.

Many people who had cancer wanted life to return to what it had been before their illness, but that was not possible.

‘‘You don’t have the same physical resilience.’’

It was important to ‘‘be accepting of the new you rather than pining for something that may not be’’.

Supporting others as they faced a battle with cancer was one of the positives to come from the situation.

‘‘I consider that’s a privilege through this journey to be able to do that.’’

She had faced many hard times in her life, and coping with those had developed resilience which helped her to deal with the cancer.

‘‘I think if you can openly talk about [a tough situation], you learn something from it, grow from it and you learn for it not take control and eat you.’’