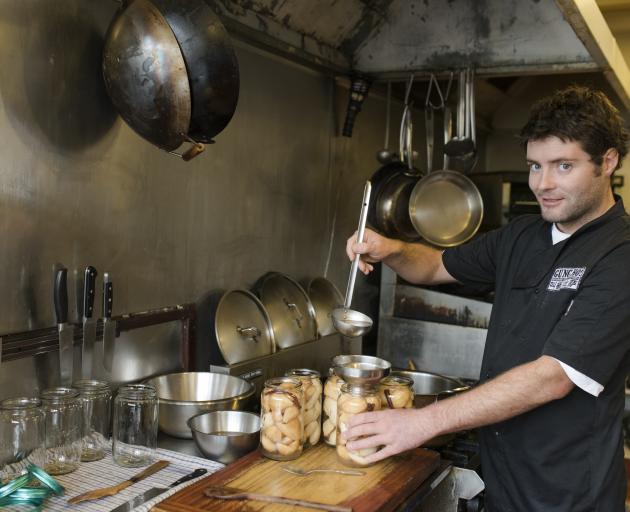 He was delighted and "pretty surprised" when he found out his preserved apricots in riesling and sugar syrup was one of 20 finalists in the Cuisine Artisan section of the New Zealand Food Awards.

Mr Hayden, who is a chef with Cardrona Terraces, Wanaka, uses spray-free apricots from two suppliers on Burn Cottage Rd, Cromwell, and Earnscleugh, near Alexandra.

He also makes apricot, and apricot and blueberry jams, as well as quince paste and quince and feijoa paste.

"My main product that got me started was preserving apricots in riesling syrup.

"The riesling helps with the preservation, colour and the richness of flavour.

"I branched out to apricot jam and apricot and blueberry jam."

He used recipes from his grandmother and aunties, and methods he found in old New Zealand cookbooks, to create his Central Otago fruit preserves and pastes, and he sells his products at sites around the country.

"My grandmother used to do a lot of preserves in Clyde, and I read through the old Kiwi cookbooks to find the best way for me to do them in volume," he said.

"It is a bit of nostalgia."

He started his business in 2013 and it has grown steadily since, with two and a-half tonnes of apricots halved and packed into jars during a two-week period at harvesting time the season before last.

Last year there was not as much fruit, as his suppliers got hit by late frosts.

He makes small batches at a time.

"I find the flavour is more vibrant in small batches."

His job as a chef provided him with the ability to follow his passion to create preserved fruit, he said.

Oats were sourced directly from farms in Otago and Southland and processed at FoodSouth's facility at Lincoln.

Sixty individual products from 48 companies are finalists in 10 categories in the food awards, and one category winner will be named the Massey University Supreme Award winner at the Gala Dinner in Auckland on October 23.