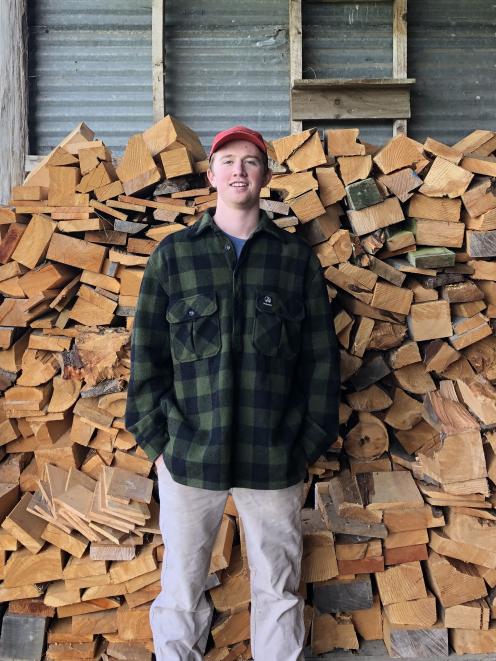 Scholarship success...Nic Melvin (19), of Dipton, is this year’s recipient of the Southern Wood Council’s Scholarship, worth $4500 over three years, which he will put towards his student fees. PHOTO: SUPPLIED
Many of Nic Melvin’s ancestors were in the forestry and sawmilling business in New Zealand from the 1860s and he knew from an early age he wanted a career in the sector.

From a dairy farm at Dipton, Mr Melvin (19) is in his second year of a four-year forestry science degree at the University of Canterbury.

He has been awarded this year’s Southern Wood Council’s Scholarship, worth $4500 over three years, which he’ll put towards student fees.

His father used to be a tree feller for whom he started working when aged about 13.

A key focus was learning about enhancing the environment, including studying climate change, soil properties, native plants and biology.

One of the attractions of the sector was being able to spend time outdoors, and Mr Melvin was considering working in forest harvesting once he graduates, although he was keeping options open.

He encouraged others to consider forestry as a career.

‘‘There are heaps of opportunities and it is a great industry to get into.’’

The scholarship is part of an annual programme set up by the council in 2011.

Wood council chairman Grant Dodson said it was an opportunity for forestry and wood products companies in the lower South Island to put something back into the industry and to support outstanding students studying towards either the forestry science or forest engineering courses at the School of Forestry, University of Canterbury.

Skilled people were needed to design forestry roading, waterways and bridges, exporting, data capture and analysis, along with operating multimillion-dollar machines, driving trucks, and dealing with health and safety.

‘‘There are huge opportunities. It is a fantastic industry to be in.’’

Some parts of the country were struggling to attract enough workers and the industry was keen to get capable, well-trained workers.

The council also named its annual 2020 Apprentice of the Year for the lower South Island. He is Jordon (Jordy) Muru, from MJ Logging, in Geraldine. Jackson Hopkins, of Mike Hurring Logging, Balclutha and Jackson McCallum, of McCallum Harvesting, Invercargill were runners-up.