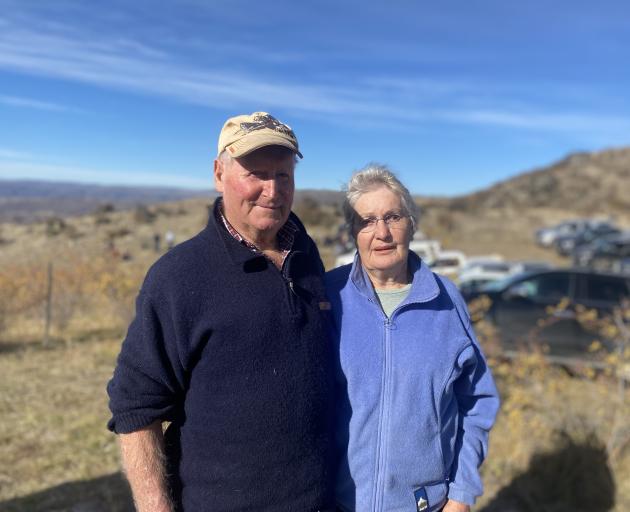 Rob and Robyn McGregor fondly recall their younger days contract fencing on remote East Otago run blocks while also farming in Waikouaiti. PHOTO: ALICE SCOTT
Contract fencing for more than 40 years, Rob and Robyn McGregor recall a life of hard toil, isolation and the never-ending balancing act with a farm and young family in tow. Alice Scott shares their story of an era gone by. It all began in the Maniototo in the 1950s.

A young Robin (Rob) McGregor was working as a fencing contractor. A blind date was arranged with a "nice young lady", also called Robyn.

Farming was always the goal for Rob, and Robyn was just as passionate about working the land as he was. She had been a "land girl" at Redcliff Station near Te Anau, before training as a Karitane nurse and moving to the Maniototo.

After the couple married they moved to Wyndham for a short time before being approached to purchase Rob’s uncle’s farm in Waikouaiti.

"His own son wasn’t interested, and I had saved quite a bit of money by then with the fencing. My uncle left a little bit of money in the farm which gave us our leg up to farm ownership," Rob said.

The farm was on the outskirts of Waikouaiti.

"It went from the township to the Waikouaiti river and from the railway line to the beach."

The couple ran about 800 ewes and a handful of cattle on the farm.

"It wasn’t an economic unit on its own, so I stayed contract fencing as well."

Rob has many fond memories fencing the run blocks inland from Waikouaiti.

"The Blucher, the Sisters, El Dorado, the Hummock ... I fenced all of those runs. The runholders would lay the gear out and we would put the fences up."

Before the couple had children, Robyn also worked the fence line, pulling wires and camping out at the runs with her husband. The couple were both fit and enjoyed the work, despite the hard labour.

"We didn’t have a tractor and post driver. Every post was dug by hand and every waratah was hammered in," Rob said.

"It was hard going at times, and we had to do quite a lot of blasting to get through rock. It was very hard work really, when I think back now."

"But we didn’t know any different. You just got on with it," Robyn added.

Robyn hung up her fencing gloves after her first child was born and after that Rob always had a "young lad" to help him.

"They were all great young fellas I had work for me over the years," he said.

The farm work was Robyn’s responsibility, alongside raising their four children.

"I would put the ewes on the crop and off again in the winter. There was always something to keep me busy," she said.

She often had to get up early in the morning still in her nightgown to help Rob start his old flat-deck Chevy ute.

"It had a crank handle, but it often wouldn’t start so I would tow him along Henry St with the tractor and it would cough into life."

Sometimes it would not start at all, and the truck bonnet wore a few angry outbursts from Rob.

Life got a little easier for the couple when they subdivided some of their land into town sections and sold them.

A new Mazda ute was one of the first purchases and the couple also built a big home in the 1980s with macrocarpa timber milled from the farm.

When their children were older, Robyn worked as a nurse at Cherry Farm hospital for 14 years.

The farm’s low-lying profile next to the Waikouaiti River meant it was prone to flooding and a continual cause for concern when the forecast turned bad.

"We lost 200 ewes one year, which was very devastating," Robyn said.

The couple sold at Waikouaiti in 1990 when they bought a larger farm at Galloway in Central Otago. With 2000 stock units, it meant Rob could finish contract fencing and become a fulltime farmer.

"Life got substantially easier from then on. We had 500 acres [202ha] under irrigation. It was a very good move."

The couple have since sold that farm and moved to a lifestyle block overlooking Alexandra, but have plans to soon retire to Clyde.

"We’ve had a very good run. Our lives have been very busy and hardworking. But also, very fulfilling," Rob said.

"We are looking forward to not having animals to tend to so we can get away to see family overseas and enjoy a bit more time at our wee house in Karitane."