The prosperity of the Mid Canterbury district stems from the 67km-long Rangitata diversion race (RDR), which started from humble beginnings with workers using picks, shovels and wooden wheelbarrows in its development at Klondyke, Mid Canterbury in 1937.

It has gone on to supply water to the district's plains and helping to generate social and economic benefits to Mid Cantabrians, from the people on the land, to those in its towns and villages.

The engineering feat required for its development was celebrated with new signage provided by the Mid Canterbury RDR community and those connected to the system.

They included farmer and RDR Management Ltd (RDRML) chairman Richard Wilson, irrigation scheme representatives, members of the engineering fraternity and other invited guests such as ''RDR Kid'' Viv Barrett (87), who, at age 5, lived with his family in the RDR camp at Ealing as his father Jim was the first RDR raceman. 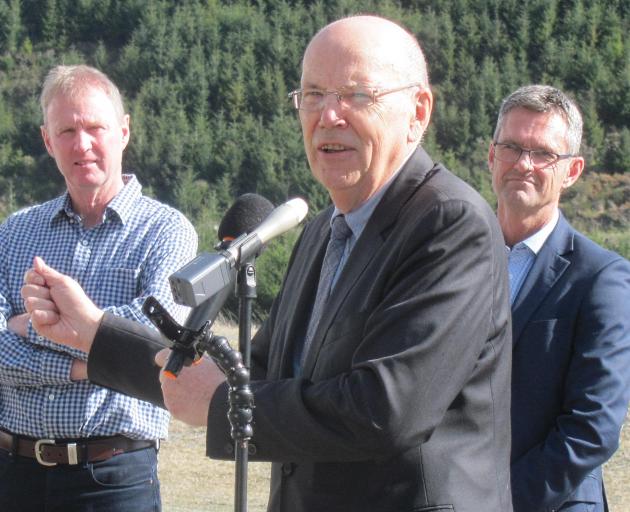 RDRML interim chief executive officer Tony McCormick said the celebration was the result of discussions between it and the IPENZ, which agreed the RDR project needed better acknowledgement. 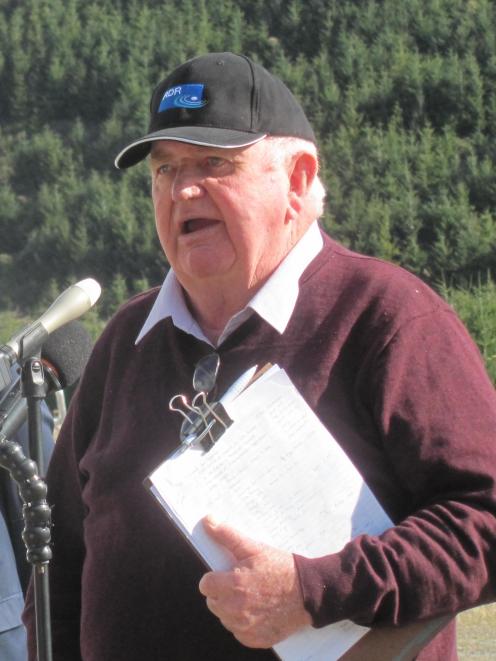 Dr Terry Heiler, of IPENZ, speaks about the engineering feat of the Rangitata Diversion Race.
During the celebration an official information board detailing its history and its ''engineering wizardry'' was unveiled at the Rangitata River intake, at the top of Klondyke Terrace.

The RDR, completed in 1945, runs from the intake on the Rangitata River to a discharge site at Highbank, on the Rakaia River.

''As a farmer who has spent all my life within the schemes, I feel that the RDR is part of my river, the Rangitata, because it's an incredible part of its social economy and everything that has come out of this district.

''The economic backbone of our community is anchored in our ability to use water for irrigation and electricity generation and also in the future [the RDR] may help it enhance our environmental environment through MAR [managed aquifer recharge systems].''

''It is a great testament to the designers from its origins with flat irrigation, to spray, pivot and in the future to variable rate irrigation, the RDR still runs the same way and fills the same purpose it was built for,'' he said.

''Mid Canterbury's economic prosperity is linked to the ability to use our plentiful water resource, and without the RDR running across the top, we would be very hamstrung to be able to get the water from (the intake) and to all the farms and the communities it serves.

An ECan councillor, Mr Caygill, then minister of finance, signed the transfer documents from the Crown to the local community on October 1, 1990. 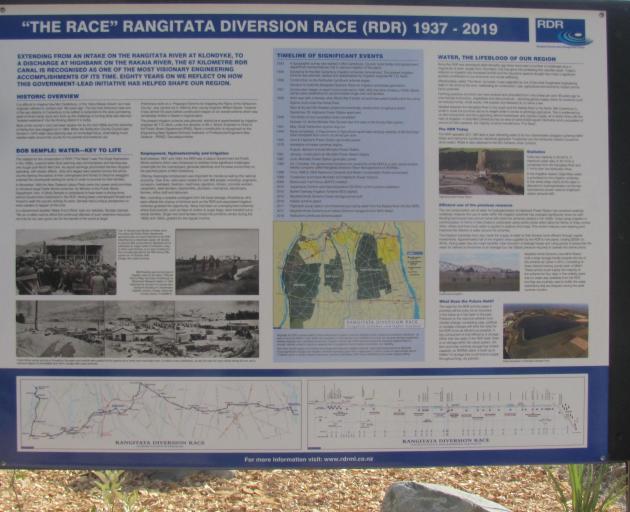 The official information board detailing the RDR's history and its "engineering wizardry'' was unveiled at the Rangitata River intake at the top of Klondyke Terrace during the celebration.
''I was proud to be part of that transfer. I was confident that it was the right thing for the Government to be doing,'' Mr Caygill said.

It was an example of a project which was better administered locally or privately, rather than publicly, he said.

''When I think what this project has contributed to the community, I am well satisfied.''

Dr Heiler said the RDR designers in 1935-37 were dealing with complex hydrological issues which were, even now, studied using complex computer models.

''... but these guys got it right. They got the hydrology right, as proven by 75 years of operation.''

He spoke of size of the gorge project and the use of a diversion of water via gravel weirs.

''The RDR is a system, a complete system that starts here at the river and reaches right into the financial and wellbeing health of the Ashburton River,'' he said.

The Rangitata Diversion Race. Photos: Toni Williams
''It was the biggest and the boldest move that was made in a country coming out of depression and looking forward to world war. It was a bold move to realise the potential of the trans-Rangitata desert that no-one else could farm in the years leading up to the year the water was available, in 1945.

''In those early days, this concept was, in itself, of international importance, to envisage the diversion of an alpine river from a vicious gorge carrying high bedload, the transporting and distribution of it across the plains, the crossing of 12 rivers - all of them equally difficult - the inclusion of hydro-electric power generation at the same time, which in itself was a very new thing,'' Dr Heiler said.

The race was initially celebrated in 1990 under Engineering New Zealand's heritage project.

It was listed as one of 69 examples of New Zealand engineering which helped to shape the communities of the nation.