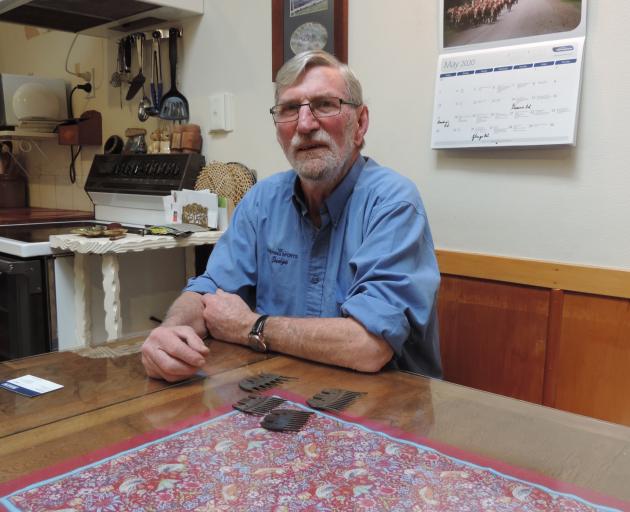 Time flies ... Colin Gibson, at his North Otago farmhouse table with shearing combs from New Zealand, Australia, and the United States, has been a shearing judge for 50 years. PHOTO: SALLY BROOKER
The magnet on Colin Gibson’s fridge says ‘‘I thought growing old would take longer’’.

It seems appropriate for the man who has been a shearing judge for 50 years and shows no signs of slowing down.

He was aware of his long history in the industry when he was involved with the world record attempt by Stacey Te Huia, near Ranfurly, in January. The attempt was abandoned at morning smoko when the total had slipped out of reach, but Mr Gibson featured in television coverage of it recently on the equally long-running Country Calendar.

He was a mentor for trainee referees at the event, teaching them to officiate when records were being contested.

There were only five or six such referees in New Zealand and Australia and a smattering in South Africa and the United States.

Mr Gibson thought he’d done his time and should retire from refereeing. But his friends and fellow stalwarts wouldn’t hear of it, so he figured he might as well stick with it while he still enjoyed it.

Mr Gibson grew up on a sheep and beef farm in Devils Bridge Rd, then worked as a farm hand at Patearoa and Gimmerburn after he left school.

He liked mustering, which he would do on horseback in the high country.

He had two brothers who were shearers and one talked him into becoming a fulltime shearer himself. He did that for about 15 years, interspersed with a bit of work at his father’s farm.

In 1971, he got a phone call asking him to become a shearing instructor for Central Otago, filling a vacancy left by a Wool Board representative.

He continued his shearing career at the same time, representing New Zealand in Australia in 1977. The Kiwis won that test, despite using the narrow combs Australia has persisted with.

Mr Gibson has a collection of combs including the Australian version, the wider concave New Zealand combs that generally make Kiwi shearers faster, and a United States adaptation of the concave comb with every second tooth removed to leave some wool behind.

He has always worked with shearing machines, never blades. He used the old convex combs during a pre-lamb shear when he was starting out, then the concave combs were brought in.

Shearing equipment had changed very little since then and was unlikely to in the future, Mr Gibson said.

The technique he taught had also remained largely the same throughout the decades. It was based on the method popularised by Godfrey Bowen, that entails balancing the sheep against the legs.

When asked what he most wanted his pupils to learn, he said: ‘‘The farmer wants the wool and the sheep wants the skin.’’

Shearing in a gang ‘‘makes you competitive’’, he said.

‘‘You always want to beat the bloke in front of you.’’

However, quality was always more important than quantity.

Today’s shearers — at least those taking part in competitions — ‘‘make a top job’’, he said.

Mr Gibson retired as an instructor in 2007.

‘‘I enjoyed it, teaching young guys.’’

There were not many female pupils in New Zealand, but he had trained quite a lot in a trip to the US.

Mr Gibson was sent there by the Wool Board, which dispatched a New Zealand tutor each year. He was based in Oregon and visited many other parts of the country.

The women trainees were mostly from lifestyle blocks. After sending their children to school, they would shear their small flocks during the day.

Mr Gibson gave up his own shearing career to buy his farm at Rosebery in 1979 — ‘‘when wool was worth something’’.

His neighbour, Barry Meikle, was also a shearer, so the two of them joined forces to shear both farms’ flocks.

A bad drought in North Otago in 1988 led Mr Gibson back to his old trade. The men he was shearing with in South Otago were off to Britain for the winter, so he joined them and spent about three months in Wales.

The locals were astonished by Mr Gibson’s prowess — they’d never seen anyone shear 300 sheep in a day.

Mr Gibson also visited relatives in Dumfries while he was in that part of the world.

He has been a competitor and a judge at the Golden Shears in Masterton, and believes he and his son Matt are the only father and son to have each won the junior title there. They both came second in the senior section, too.

Another son, Scott, was also a shearer and was now taking over the Seadowns Hereford Stud that Mr Gibson and his wife, Lynne, established in 1994.

Romneys were Mr Gibson’s sheep breed of choice, but now he has mainly cattle on the property.

He does not believe the sheep industry will die out, but wonders whether wool will make a resurgence in his lifetime.

His judging role has taken him from Invercargill to Warkworth and given him a wide group of lifelong friends. He has been to the Golden Shears for the past few years and enjoys catching up with everyone there and at other competitions and A&P shows.