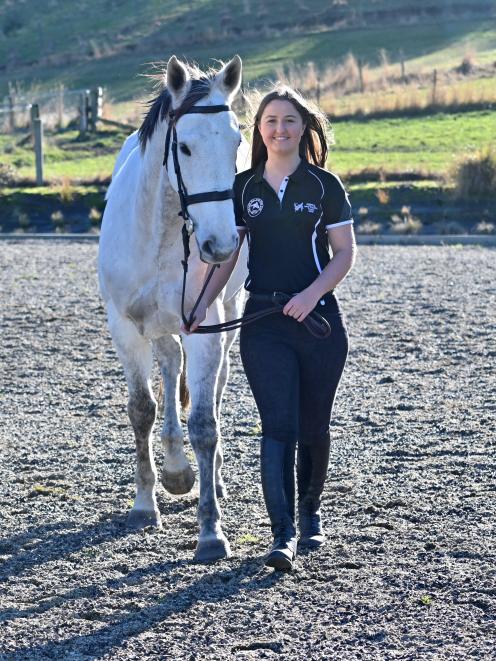 Outram rider Hollie Kooman gets in some training with her horse Silver Gamble in Outram yesterday. Kooman will represent New Zealand at the Nation's Cup in Hong Kong next month. Photo: Linda Robertson
First you jump for joy.

Then you are jumping with nerves.

And soon she will have to jump for success.

That is pretty much the order of events for 18-year-old Outram rider Hollie Kooman.

The University of Otago health science student was named in the four-person New Zealand team for the Inter-Pacific Exchange earlier this year.

New Zealand will compete against a team from Australia, Canada, Hong Kong and the United States for the Nation's Cup - a showjumping event - in Hong Kong next month.

Kooman leaves this Saturday, and is following in the footsteps of Olympian Clarke Johnstone, who grew up in Outram and also competed at the Nation's Cup.

New Zealand won the event when it was last held in 2017 - so no pressure.

''I have always thought it would be really cool to represent my country, so to get the opportunity to do that is pretty cool,'' Kooman said.

''It is the four best riders [under the age of 25] from each country that get selected to compete, so there is a really high standard of riders. It will be very, very competitive.''

Kooman, who was born in Gore but moved to Outram with her family when she was 11, began riding when she was just four. She started competing aged five and has not stopped.

She has ridden for the Mosgiel Pony Club, but has been with the West Taieri Pony Club for the past three seasons.

''He was the last West Taieri rider that rode at the Nation's Cup for the New Zealand team. It is pretty cool to be following in his footsteps.''

Kooman is ''not entirely sure'' where equestrian will take her.

''Probably most kids who ride dream of having a career like Clarke.

The riders will compete on borrowed horses in Hong Kong. That can be unsettling but everyone is in the same position ''so that makes it fair''.

The Nation's Cup gets under way on July 11 at Beas River Equestrian Centre.

There is also a dressage competition before that, but Kooman's focus is on the showjumping event.

''The last time they held the Nation's Cup New Zealand won. I don't know any of the other riders in the team but obviously they are good enough to all be there, so we should have a good team.''

While Kooman is looking forward to the competition, she is keen to see what it is like to own horses in Hong Kong compared with New Zealand.

She has gained her H certificate for horse management and is keen to absorb as much knowledge as she can on the trip.