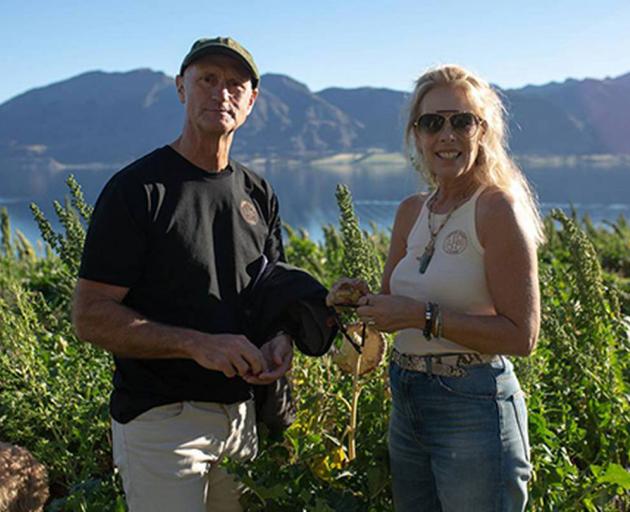 The couple went back to their rural roots in 2019, buying the 6500ha high country station and converting it into a carbon zero certified farm, where they now run 10,000 merino sheep.

The Ross' are the founders of the hugely successful 42 Below vodka company and, on the show, Justine described them as "natural disrupters".

However, their "disruption" in the shearing shed and promotion of regenerative agriculture has ruffled a few feathers in the rural community.

The backlash has been so fierce the iconic show was compelled to address it on its Facebook page.

"We've had a huge response to the show about carbon reduction and animal welfare at Lake Hawea Station. And although it was our highest-rating episode of the year, most of your comments are negative!" the post began.

A lot of criticism was aimed at the changes in the shearing shed, where the focus had moved from the shearers to the sheep.

The shearing board was painted white, to show up any blood, and mattresses had been placed at the bottom of the porthole chutes to protect the sheep on their way out of the shed after shearing.

The shearers' usual preference for rock anthems has been replaced with classical music to calm the animals and a scorecard for shearers' performance was judged on the experience of the sheep, as opposed to the traditional tally.

During the episode, Geoff Ross said the decisions were made to appease and educate overseas consumers who believe shearing is harmful to sheep.

One commentator claimed it was "very obvious that the Government money has infected TVNZ".

A spokesperson for TVNZ said the broadcaster was state-owned but commercially funded and operated independently.

The shearing regime faced fierce criticism as well, saying scorecards for shearers were "crapola" and that they should be allowed to pick their own music "even though a lot of it is rubbish".

The show also came under fire for presenting an unrealistic version of farming in New Zealand, as not all Kiwis enjoy the same financial situation as the couple.

"Not everyone can sell a vodka company for millions and then buy a farm to try [to] promote their fantasy ideas," one comment read.

Someone else called for "real farming" to be depicted, asking for "real people with real mortgages and real challenges".

Not all the feedback was negative, with some supporting the couple's environmental efforts and chastising those who complained.

"Unbelievable how many nasty comments there [are] over this episode. You should all be ashamed. Absolute keyboard warriors."

One commentator couldn't understand what all the fuss was about, saying they thought the programme was "fantastic" and had watched it more than once.

"Well done to their conservation measures and thinking outside the box!" they praised the couple.

The couple sold their alcohol brand 42 Below to Bacardi in 2006 for hundreds of millions. They also own companies Ecoya and Trilogy.

Their farm, spanning 6500ha of South Island high country, has over 10,000 merino sheep and, according to their website, aims to "conserve and restore biodiversity and introduce regenerative farming practices."

Whatever the tone of the feedback, Country Calendar said it had helped to make Lake Hawea Station's entry the highest rating episode of the year so far - perhaps just not in the way it intended.

Geoff Ross could not be reached for comment before the publication deadline.