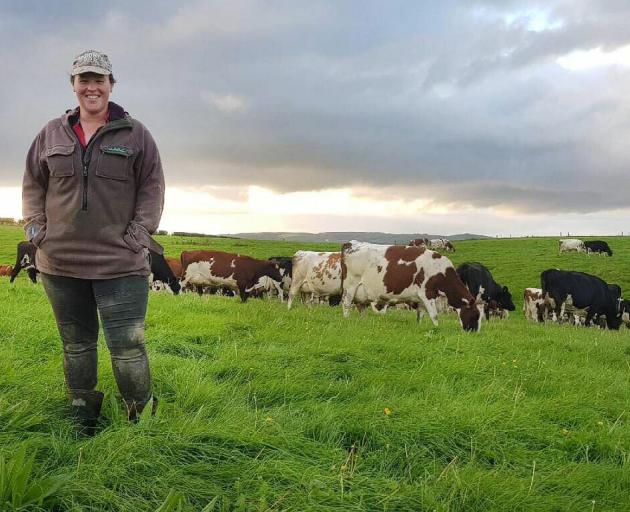 Her particular passion is for the Ayrshire breed, continuing a long family history which started when her mother’s family — the Morton family — established the Ingleside stud in Southland in the 1940s.

The 29-year-old recently became an accredited junior judge for the breed, which meant she could judge at shows alongside a senior judge and, after a few shows, sit another paper to become a senior judge.

Miss Brown was brought up showing cattle and was leading calves when she was big enough to handle them.

Originally from a sheep and beef farm at Otama, before moving to a lifestyle block at McNab, she started relief milking on a farm at Benio in her last year at Gore High School.

The dairy industry was not originally her first choice: she wanted to go sheep and beef farming when she left school but had no luck getting a job.

An opportunity arose to take a position in the dairy industry with West Otago dairy farmers Phil and Chanelle Purser — and she never looked back, she said.

Miss Brown was full of praise for the couple, saying they looked after her and were also mentors for her first foray into the industry.

She now worked for the Eade family at Kelso, who farm both Ayrshire and Holstein Friesians, and have a long involvement in showing cattle, and she was taking on a farm manager’s role in the coming season.

Eventually, her goal was to own her own property but she acknowledged it was very hard to do that without having family on a farm.

Miss Brown’s plan was to move up the ladder and go lower order sharemilking and work her way up, slowly building up her herd.

She was looking forward to having some judging assignments. Last year, she was associate judge for dairy cattle at Tokomairiro A & P Show, judging alongside her boss, and that was a "bit of a taster".

She loved the Ayrshire breed, saying they were a good, hardy animal which suited conditions in the South.

Outside work, Miss Brown enjoyed getting out in the bush and going hunting. She was also a member of West Otago Young Farmers and enjoyed seeing that club grow from about four members, when she first joined, to the high 20s or 30s now.