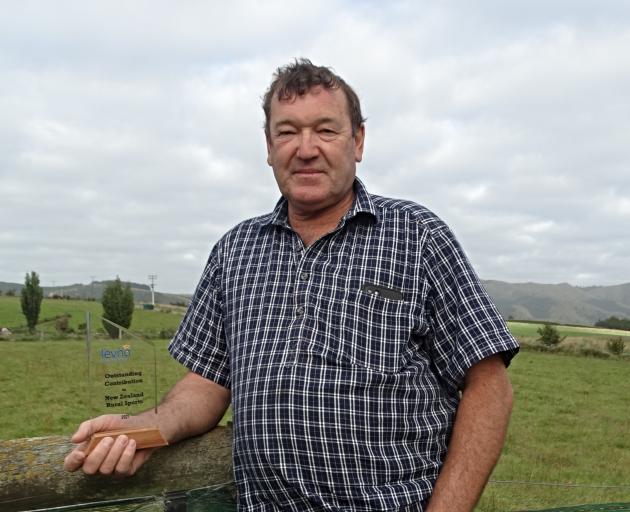 As well as running his own business, he is president of the Waimate Shears and hopes to bring the world shearing and wool handling championships to the South Canterbury town one day.

He was also the driving force behind the building of an $800,000 shearing pavilion at the Southern Canterbury A&P Association Showgrounds, opened in 2017, which was also used by the community for other events and functions.

Mr White started shearing in 1980 and he loved it because it was hard work which paid off.

He also loved how competitive it was as "you’re always racing your mate".

He was humbled and surprised about winning the award, along with harness racing enthusiasts, Murray and Deneece Goldsworthy, and he enjoyed the weekend of activities, including shearing, held as part of the New Zealand Rural Games.

What motivated Mr White was people coming to watch shows at the Waimate Shears and enjoying the sport.

"We run a good show. People keep coming back next year," he said.

About 14-15 years ago, shearing competitions used to be about $5 each, but he remembered when a family could not afford to pay and decided the event should be free entry, so anyone could enjoy it. He made money from selling beers and raffles instead, and other fundraising activities as it could cost up to $50,000 to run a show.

Mr White was pleased with the way the new purpose-built pavilion turned out. It had also been well used for other functions including weddings, funerals and meetings.

The Southern Canterbury A&P Association and the Waimate Shears committee went halves in the cost of the pavilion and plans to revamp it were ongoing.

Several years ago, a ROTEK camera was bought for live streaming so people could watch the shearing competitions from anywhere in the world.

Shearing competitions were all about speed and quality. Competitive shearers and woolhandlers’ goals were to make the Golden Shears, held in March in Masterton, although this year’s event was cancelled due to Covid-19, while the New Zealand Shearing Championships were being held in Te Kuiti in early April.

It was a big show as entries flooded in after the cancellation of the New Zealand Merino Shears in Alexandra and some of the country’s biggest names in shearing and woolhandling were competing.

Mr White was grateful for the support from within the local community, along with appreciating his work.

It was a busy life for him with also running his own business and he was usually up between 5am and 5.30am. He had to make sure those in his gangs were getting to work and would sort out any issues they might have, such as machines breaking down.