About 170 people attended the event in Alexandra on Friday night, where the winners of the Clip of the Year and Child Cancer Foundation fleece competition were named.

The overall Clip of the Year title went to the Sutherland family, from Benmore Station, a property synonymous with high-quality fine wool.

Brothers Bill and Andrew Sutherland, with their wives, Kate and Deidre, have had considerable success in the awards over the years.

In 2016, the Sutherland family marked 100 years on Benmore, a 5400ha property between Omarama and Twizel.

They also farm the 3800ha Ahuriri Downs, which was runner-up in the over-17.3 micron category won by Benmore. 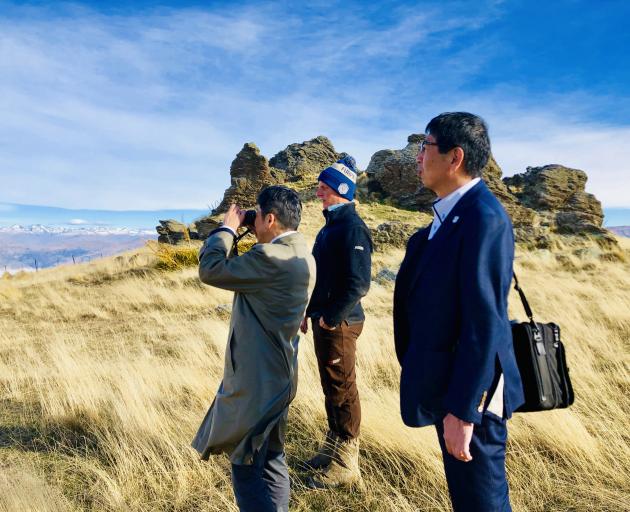 Checking out the scenery on Northburn, near Cromwell, are Nikke Group executives Takanobu Matsumoto (left) and Hiroyuki Kondou, with farm manager Ben Nielsen-Vold. Photo: New Zealand Merino Company
A highlight of the awards evening has always been the presentation to the Child Cancer Foundation as part of a fundraising initiative that started 30 years ago.

The partnership began when the association wanted to do something to support the Goodger family, of Merivale Station, in the Lindis Pass, who had a child with cancer.

''We wanted the family to know that we were there for them. We looked at what we could do as a community that could be of value.

''It was pretty clear from talking to the Child Cancer Foundation that, by funding their efforts, we'd be having the biggest impact, with the current membership carrying on the good work begun by the generation before us,'' outgoing Otago Merino Association chairman Bevan McKnight said.

Each year, farmers were invited to give a fleece - often they gave more than one - which was then graded and sold by the New Zealand Merino Company, with all funds donated to the foundation.

''We don't have to think too hard about putting aside a fleece each year for a good cause,'' Mr McKnight said.

Celebrating their success in the Clip of the Year competition at the Otago Merino Association awards are (from left) Andrew Sutherland, David Prebble, Deidre Sutherland, Kate Sutherland, Lou Egan and Bill Sutherland, from Benmore Station. Photo: Barbara Newton
It had gone beyond the OMA community - fine wool growers outside the region were also contributing fleeces.

Child Cancer Foundation business development manager Claire Robb said that while the foundation was fortunate to have many donors who contributed in various ways, the partnership with the OMA was one of the longest-running and most creative.

The money raised for the foundation now totalled $366,000 - the latest cheque for just over $25,000 was presented on Friday night.

Japanese high-end suit maker Nikke Group bought the 2018 fleeces, as well as teaming up with NZM to make a financial contribution.

While the cost of support varied from family to family, on average it cost about $10,000 to support a child and their family for one year.

''Typically, child cancer treatment programmes last approximately three years so the donation this year will, hopefully, help us cover most of the costs of at least one child and their family for the duration of the child's treatment,'' Ms Robb said.

Nikke also donated two suit lengths of 15.5 micron suiting, made from 100% New Zealand wool, to be auctioned as part of the fundraising.

The successful purchasers were Graeme Rive, and Brent and Hayden Hickey, who were successful bidders on the second suit length after Craig Smith generously reoffered his initial purchase.

A total of $12,000 was raised in the auction items. Next year's donation would include that plus the proceeds of the sale of the donated fleece wool.

It was fitting that Mr McKnight - in his swansong as president - and his wife, Tiffany, won the fleece competition for an ultrafine fleece from Merino Ridges, their Ida Valley property.

They were taken up the hill by farm manager Ben Nielsen-Vold and were ''quite blown away'' by the visit, Mr McKnight said.

He was thrilled that Nikke Group had ''jumped on board'' to support the Child Cancer Foundation.

There were 91 fleeces entered in this year's Child Cancer fleece competition, although there were probably a further 80 that were donated, Mr McKnight said.

While it was a nice fleece that Merino Ridges had entered, judges were always looking for different things, so you never knew how judging would go, he said.

It was a thrill to win - the couple also won in 2016 - and it was also pleasing to see the competition going from strength to strength.

As far as the state of the merino industry went, Mr McKnight said it ''couldn't be much better''.

''It's as good as it's been for a number of years. With contracts going forward, things are looking pretty positive,'' he said.

The association's new chairwoman is Jayne Rive, who farms Cloudy Peak, a 2083ha property in the Ardgour Valley, near Tarras, with her partner, George Reed.

Ms Rive has had a long-standing passion for merino sheep and has focused on breeding a dual-purpose animal.

NZWTA Clip of the Year