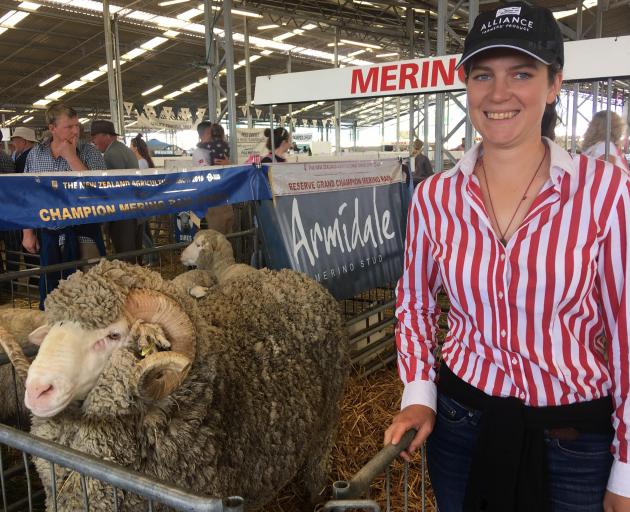 Miss Gardner (25), who comes from a sheep and beef farm at Waihaorunga, near Waimate, won the merino junior judging competition held at the Paterson family's property Armidale in the Maniototo recently.

That qualified her to compete in the junior judging competition at the New Zealand Agricultural Show in Christchurch last week where she finished second.

She had previously won a cattle-judging competition, which saw her travel to Australia, but she had not tackled merino judging.

The Gardner family have merinos and halfbreds on the family farm and, when Miss Gardner saw a flier for the Central Otago competition, she thought she would have a go at learning more about merinos.

It had been a few years since she had done a stock-judging competition, but "you learn a lot by doing it, by actually learning to critique the animal", she said.

After placing the animals in order, she then had to explain her reasons why but she was not fazed by that, laughing that she was "a talker".

Miss Gardner enjoyed the breeding aspect of farming and was particularly passionate about wool. The likes of feed budgets she could "take or leave", she said.

She was due to shortly complete a Certificate in Wool Technology.

A keen showjumper, Miss Gardner used her horses for cattle work on the farm. Her aim was to take over the 600ha family farm and she was always looking to learn.

It was a family affair at the Christchurch show as her brother Thomas, who works for ANZ in Christchurch, was announcing in the ring.

Asked about her thoughts on the future of farming, Miss Gardner said people were being "a bit rough on it for what it really is". Farming in New Zealand had a lot going for it.

When it came to the likes of the stock-judging competitions, it was great to be able to get such an opportunity. There were a lot of opportunities in the agricultural sector for young people, she said.