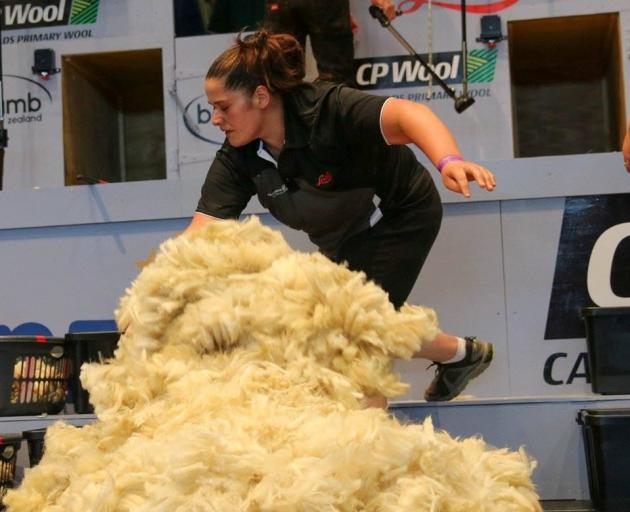 Cheri Peterson, who had her first Open-class woolhandling win on Friday at the Southern Shears in Gore, pictured at an earlier event. Photo: Barbara Newton

Milton woolhandler Cheri Peterson has become the latest addition to the ranks of Open-class winners by claiming the Southern Shears title in Gore.

Uniquely, all three in Friday's final were gunning for their first Open win in New Zealand, with the South Otago rookie winning by just over 15pts from runner-up South Island-based Foonie Waihape, from Gisborne, and third placegetter Candy Hiri, of Gore, who were separated by just 0.53pts.

While Waihape had the quicker time and both Waihape and Hiri had better board points, Peterson had the better fleece and oddments points, to make extended a unique record at Gore.

Having had her last win anywhere in the Otago championships Senior final in Balclutha in 2016, she was also third at Gore in her first season in the Open class last year.

Friday's win came in the absence of defending champion Joel Henare, now living and working in Motueka and having to put family commitments first after scoring his 99th Open-class win at Balclutha last week.

The 2017 runner-up, Chelsea Collier, of Gore, was part of a mass elimination of high-flyers in the heats, with their being no semi-final. The othe early departures were former World titles winner Sheree Alabaster, of Taihape, fellow former national representatives Pagan Karauria, of Alexandra, Angelique Miller, of Gore, and Tia Potae, of Milton, and 2017 World championships third placegetter Tina Elers, of Mataura.

Hometown competitor Ebony Turipa guaranteed her promotion to Open-class next year when she won the Senior final, her fifth in the class, passing the threshold 13 grading points, based on a maximum of 3pts awin for an A-grade show.

Last year she won at Alexandra and in the South Island Circuit final in Balclutha, and had seven other top-three placings in other shows, and opened this season with another win at Alexandra, and another a week later at Waimate.

One of the most travelled woolhandlers in the country this season, Tyler Hira, from Onewhero, returned to the scene of her first win when she successfully defended the Junior title. With success this season also at Waimate, Manawatu, Lumsden, Winton, and Balclutha she now has seven wins to her name

Results from the Woolhandling on the first day of the Southern Shears at Gore on Friday, February 16, 2018: