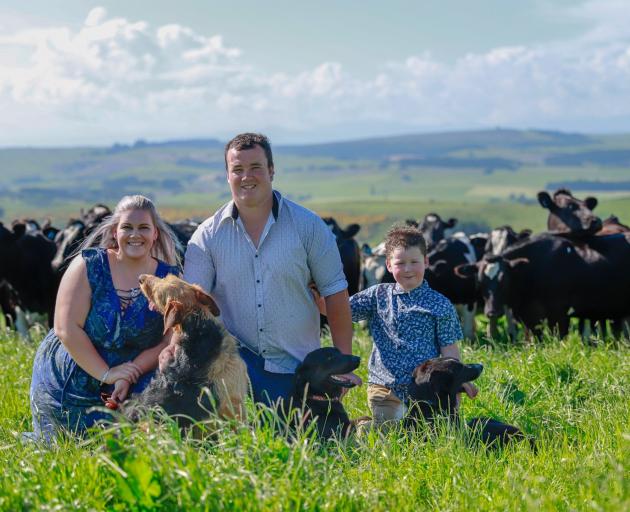 Steph and James Matheson with their nephew Bronson (7), whom they have adopted. PHOTO: ALICIA KEOWN PHOTOGRAPHY
When it comes to goals, Steph Matheson dreams pretty big.

Mrs Matheson (27) is on a mission: to make sure women feel they are not alone, that they are confident and comfortable "in their own skin" and that they feel as if they can do anything.

Through Project Steph 2.0, her personal blog, her overarching goal is to spread that message globally online.

It is not all unicorns and fairy dust; her content is realistic and raw as she talks about health, wellness, family and rural living in Gore.

She has discussed her own issues with anxiety and binge eating — sharing her weight loss journey since 2018 — along with marriage to dairy farmer James and adopting the couple’s nephew, Bronson, now 7 years old, in 2016.

Most recently, she wrote a post called The Life of a Farmer’s Wife, which was seen by nearly 150,000 people online.

"Project Steph 2.0 began as a fresh start for me to be held accountable to some life-changing decisions.

"I had reached a point in my life where failure was no longer acceptable, and I needed to do something drastic to prove to myself and to the world that I was ready to move forward in positive ways," she said.

Brought up in Balclutha, Mrs Matheson did not come from a rural background. In fact, she jokes the closest she got to a rural experience was "hooning around" on a child’s motorbike in her back yard.

Then there was motorbike riding with cousins on their dairy farm when she was 5 or 6. She received repeated shocks from the electric fence and declared she would never to go back.

It was while living in Gore she first met her husband. Brought up in Clinton, Mr Matheson had his own high aspirations; he was 19 when he set a goal of having $1million equity by the time he was 30.

Last year, he won the Southland-Otago farm manager of the year award in the New Zealand Dairy Industry Awards and was runner-up in the national final.

Things moved quickly; within eight months of meeting, the couple had moved in together, adopted Mr Matheson’s nephew and adopted their first dog.

Two weeks before meeting Mr Matheson, she had been questioning what she wanted to do with her life and had booked an OE.

The intention had been to spend two years in the UK, but after they met, she decided to shorten it to a six-week holiday in Europe

When the couple first met, Mr Matheson owned one-third of a herd of cattle and a house and she had nothing except "experiences".

But they had grown together and, between them, they now owned three houses. Mr Matheson is now operations manager — the farm owner lives in Melbourne — running both the run-off and the dairy platform.

Three years ago, she had an "epiphany" about her binge eating and decided to make some life-changing decisions, which was where Project Steph was born.

Sick of following influencers whose posts portrayed that "everything in their life was perfect", she decided to create a platform which was authentic.

She tried to be as open as she could, talking about herself and what was going on in her life.

Her mission was to keep creating authentic content and giving people "that slice of reality". She particularly enjoyed people messaging her and asking questions or giving "their own take on things".

In August last year, Mrs Matheson quit her job of 10 years, deciding it was time to focus on herself and her family.

She now works part time in the office of her parents’ business, Ag and Auto Direct, in Balclutha and, this season, she undertook calf rearing, which was a new experience.

She is also a marriage celebrant, helps people with social media and is president of the local school’s Parent-Teacher Association.

Life was "chaotic", but good, she said. She and her husband were both firm believers in goals and commitment to achieve.

"We’ve been together for five years and during this time we’ve supported each other through some amazing achievements. We believe in the motto ‘Inspire, motivate, commit’,".