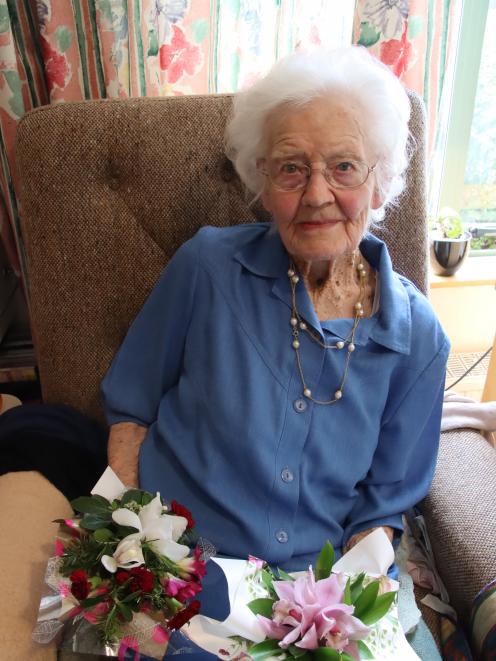 Gore’s Resthaven Care Home resident Eleanor Logan celebrates her 100th birthday today. PHOTO: SANDY EGGLESTON
From the farm to Karitane nursing to working in Harrods in London to back on the farm, Eleanor Logan has packed many interesting experiences into a century of living.

Mrs Logan (nee Galt) said she grew up on a farm at Tuturau.

Life on the farm was busy with children helping out before and after school.

"It was all part of living. You didn’t think of it as work."

When she was old enough, one of Mrs Logan’s jobs was to help milk the 30 cows.

This was done with milking machines.

She liked milking the cows.

"Each cow was special. They all had their names."

From age 14 to 28 she worked on the farm and then in 1949 she started Karitane nursing training.

The training was based on the ideas of Truby King who started Plunket.

"I was very interested in Truby King’s desire for all mothers to have mothercraft and be prepared and confident to look after a baby."

After seven years, she travelled with a friend to England.

After three years the pair returned to New Zealand but later Mrs Logan returned to England.

During that four-year stint she worked in the linen hall at Harrods department store.

Back in Gore she worked as a gardener and met her future husband Tom, an Otama farmer, when she was 46.

They were married for 18 years before he died.

She had been caring for people all of her life.

"When I look back, it has been many an occasion I have been there at the right time."

Her Christian faith had also been a big part of her life.

"My Christian faith has got me through many bumps [and] hollows."