Roscoe Taggart sorts wool during a module of the Young Farmer of the Year contest. Photo: New Zealand Young Farmers
It could go down in history.

If Linda Taggart wins the Otago-Southland regional final of the FMG Young Farmer of the Year contest, she will join her brother, Roscoe, as part of the first brother-and-sister combination to compete in the event’s grand final.

Roscoe Taggart (26) has clinched a spot in the Tasman regional final in Christchurch on April 7 while Miss Taggart (25) will compete in the Otago-Southland  final on April 21 in Winton. 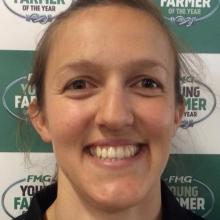 Linda Taggart
Not that Miss Taggart  is confident about  the prospect   she will be  going  head-to-head with her sibling in the grand final in Invercargill in July  She remarked  the sibling connection was "quite hard case".

Mr Taggart runs the family 732ha sheep, beef and cropping farm at Oxford while Miss Taggart is an Invercargill-based rural banker with Rabobank.

As children, they would watch the Young Farmer grand final on television, trying to guess the answers to the questions, Mr Taggart recalled.

Their father Murray, who is chairman of Alliance Group, always encouraged them to give the contest a go and eventually they did.

A member of Nightcaps Young Farmers, Miss Taggart has competed in three district contests.  This will be her first regional final.

The contest was good fun and a great way to test her skills "on a whole range of things".

Her brother did a "fantastic" job managing a diverse and challenging business and had skills she could "only dream of". She did not think he would have to worry about her ending up in the grand final.

Mr Taggart  got  a taste of a grand final as  the official bag carrier in last year’s  event for  Andrew Wiffen, of Tasman.

He said it was his sister’s day job that made him nervous.

"She’s more switched on than me. Linda could be a force to be reckoned with when it comes to the theory-related modules. I’d be doing my best to put her off as much as I could if we both make it to Invercargill," he said, laughing.

Miss Taggart, who completed an agriculture degree at Lincoln University, has become immersed in the Southland community since shifting south.

Her hobbies include hockey — she has represented Southland — and dog trials and   she is a member of the Kauana dog trial club.

Working for Rabobank was a great opportunity to look at  different businesses and  how people ran them. It was also a chance to meet a lot of people and build "amazing" networks.

Her parents would be  coming down from Oxford to watch her compete in the regional final and she intended to have a "good crack" at it, alongside some "pretty good competition".

She and her brother did  some shared study in preparation for their respective regional events.In her first year, she did not expect to do particularly well but it would be a good learning curve, she said.