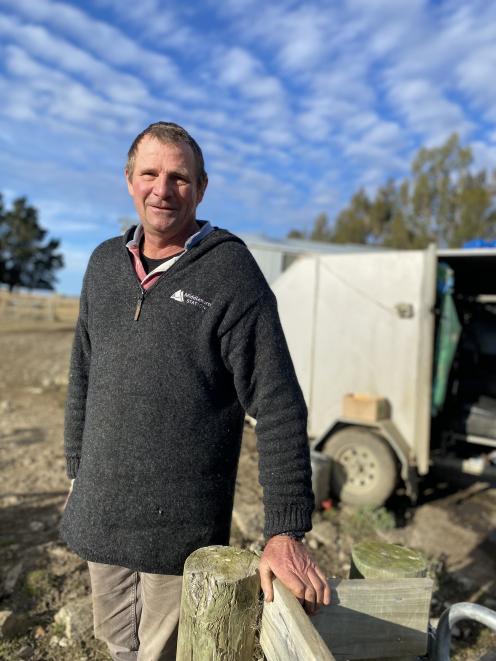 Ultrasound scanner Peter Clulee has scanned his fair share of sheep over the course of 25 years. PHOTO: ALICE SCOTT
Twenty-five years ago Peter Clulee says pregnancy scanning ewes was "like watching paint dry" for the farmer.

Three-and-a-half million ewes later, Mr Clulee has become an old hand at pregnancy scanning, getting through around 3000 to 4000 in a day "a couple of my guys can do up to 6000", he said.

Knowing whether a ewe is dry or has single or multiple lambs has become an important management tool for farmers since the ultrasound technology was adopted in New Zealand around 26 years ago.

"I was working at Hukarere Station, when it was in its first year. I got keen on it when Stu Bain came to scan the ewes, which planted the idea to perhaps have a go at it. I initially phoned around farmers I knew and it sounded like they would be quite supportive to this new idea. So with the help of Stu and Murray Dodds I got started."

Two years after that Mr Clulee got into eye muscle scanning on sheep studs.

"Basically because of the type of scanner I bought initially for pregnancy scanning was compatible also for eye muscle scanning."

The nature of the work has Mr Clulee away from his Outram base for up to 10 days at a time.

In total Mr Clulee will pregnancy scan around 150,000 ewes in a season himself "but I’m keen to back the throttle off a bit this season". His wife Carolyn is at home "keeping the books in order and the ship facing the right way".

The company has one full-time pregnancy scanner and six part-timers. Son Logan has recently joined the team and taken on the run of Neil Burnett’s.

The company will pregnancy scan around 400,000 ewes in a season.

So far this season the pregnancy scanning numbers "are back a bit" across their clients.

Many farmers have commented on the tough autumn and trying to get their lighter ewes back on track.

It’s unparalleled however he said to "those poor buggers" up north currently farming through a drought.

A new part of the business started three years ago when Mr Clulee was approached by ANZCO Foods to do a training course and operate a scanner for them doing intramuscular fat assessments (marbling) on prime cattle before slaughter. The images are captured, downloaded, sent to America and returned within 48 hours. It proved to be very accurate.

"After two seasons ANZCO dropped that particular contract and I decided to purchase the scanner from them, which is the only one in Australasia. So I am now a free agent to do independent IMF measuring on cattle."

The couple are also part of a 4-way partnership at Kinvara Deer Farm, just outside Middlemarch, and they also have a Suftex sheep stud, selling about 50 rams a year.