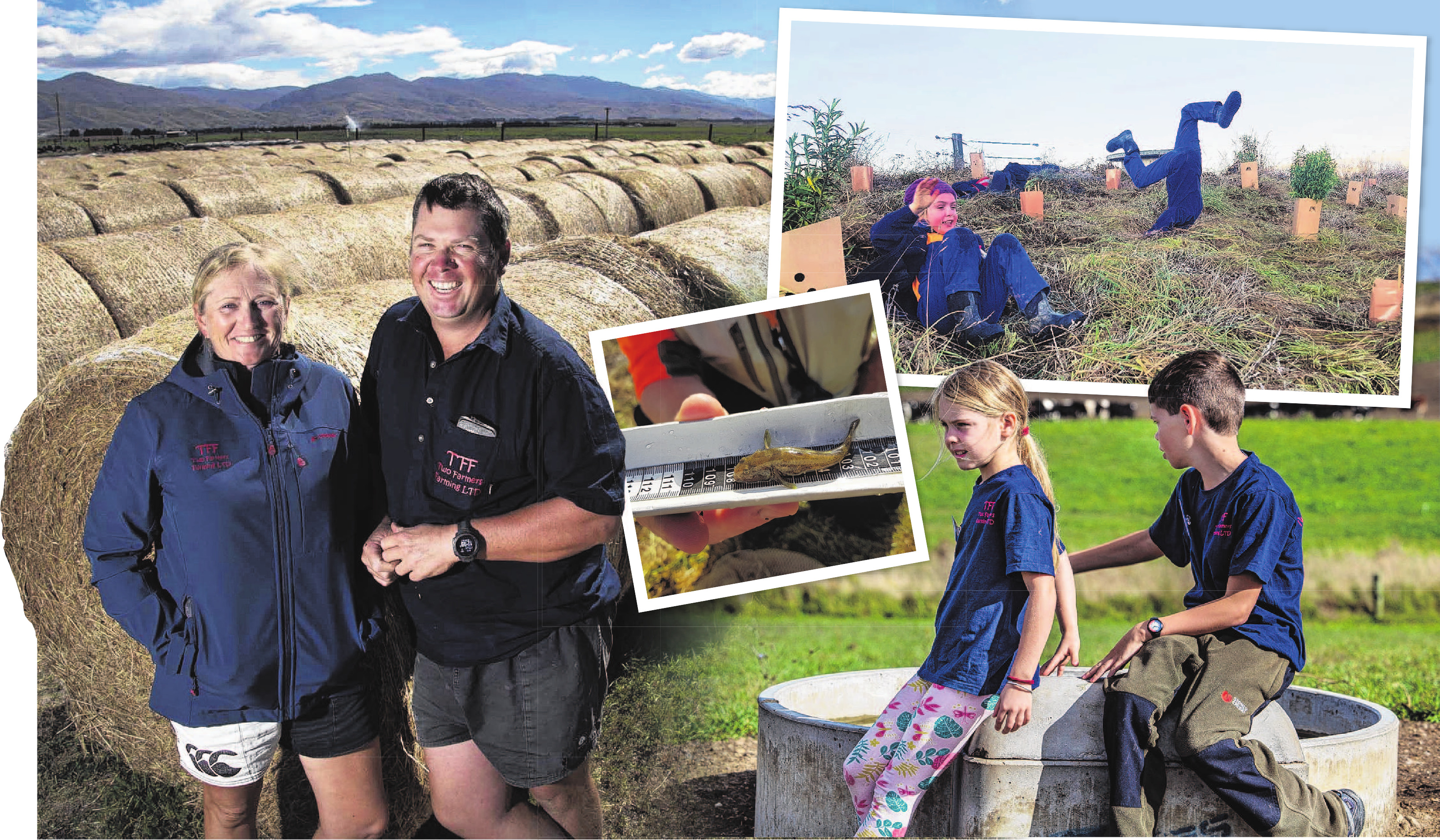 Anna and Ben Gillespie farm an award-winning dairy grazing and beef finishing operation at Omakau with their children Will and Milly who are also enthusiastic tree-planters. Also pictured, the property is home to native upland bullies. PHOTOS: SUPPLIED
As the microscope continues to focus on the Manuherikia River in Central Otago and its future minimum flows, rural editor Sally Rae talks to award-winning Omakau farmer Anna Gillespie about the stress the rural community is under.

They are two farmers farming - literally.

It was a challenging environment to farm in, with an average rainfall of about 450mm, temperatures in winter as low as -10degC and summer hitting more than 30degC, Mrs Gillespie said.

That was why reliable water was essential.

It was a farming community under pressure and highly stressed; not only were there concerns over future water management for the Manuherikia River but also the wider range of regulations being imposed by the Government and the uncertainty as to what was coming next.

A friend had put their farm on the market, having had a "gutsful", but the stark reality was it was unlikely to sell. No-one wanted to buy a farm that did not have water security, Mrs Gillespie said.

Other properties she was aware of in the area had been on the market for several years and had not moved. When potential buyers did due diligence, it was the water security that tripped it up.

The Otago Rural Support Trust recently ran a mental health wellbeing session with consultant and coach Lance Burdett, aimed at giving people the tools to deal with anxiety. Those they were most concerned about did not come and that was even more concerning, Mrs Gillespie said.

There was huge pressure; not only did people have to look after themselves and their farms but the whole community needed to look after each other, and that "adds to the pressure in a sense", she said.

With the Manuherikia River, she felt the Otago Regional Council was oblivious to the impact of the decisions it made. Huge amounts of money had already been spent to get to this point and it had "got us nowhere and the river nowhere".

The council’s decision on a management scenario for the river would be made when it notified the land and water regional plan at the end of 2023, at which point the public would be able to have their say through submissions and hearings.

Mrs Gillespie’s advice to the ORC was to "stop and listen" and look at what the group was proposing.

"We’ve done a huge amount of science in our application," she said.

The couple, who have two children Will (10) and Milly (8), lead a busy lifestyle, involved in multiple roles within the community, as well as wider industry.

Two years ago, about a day a week was spent in the home office; now she estimated it was probably closer to two days, and it meant they had to employ casual staff. While they had always had help over the winter, that was not to the extent they were having to now, plus there were the late nights involved.

While consumed by issues such as water, they also had to continue with day-to-day farming. The couple were in-sync - literally - with synchronised calendars on their phones, and a whiteboard on the wall in the kitchen, to ensure nothing was missed.

They also shared the same vision for their farm and what could happen on it, along with what the wider catchment could achieve, she said.

From 2014 to 2016, the couple were case study farmers for a Sustainable Farming Fund project on sustainable dairy winter grazing in Central Otago to identify the key environmental risks in winter dairy grazing in the region and identify management strategies to mitigate them.

The Omakau farm was their first venture farming on their own account although the pair were "born and bred farmers", both being fifth-generation on the land.

Mrs Gillespie grew up in North Otago and spent three years dairy farming before completing a bachelor of commerce degree majoring in agriculture, and a master of applied science in farm management consultancy at Lincoln University.

She met her future husband at Lincoln; he came from the Wanaka area and completed a bachelor of agriculture degree and a master’s in agricultural science (pasture science).

The couple then worked for Landcorp, followed by a brief stint overseas and Mr Gillespie managed a sheep farm in South Otago, before they moved to Omakau in 2011. They initially leased the farm from Mr Gillespie’s parents and subsequently bought it in 2017.

Water was crucial on the property. About half the property was now irrigated with spray irrigation but there was not 100% reliability. About every second year, they were on restrictions and soil moisture during extremely dry periods could "go down to nothing".

They put their first pivot on in 2013-14 and the second one the next year and it had "completely changed" the farm. What would have been growing about seven tonnes of grass a year on dryland, was now cracking 17 tonnes under irrigation.

As part of that development process, they had also done associated fencing, stock water and lanes so the investment was coming in about $2 million.

In the first couple of years, they planted predominantly shelterbelts and now they were planting natives in riparian areas.

Mrs Gillespie estimated they had put in 6000 or 7000 plants, and there would be 1200 native plants going in this year. Next year, all their plants would be "coming out of the vege garden", she laughed - as Mr Gillespie was become very keen on seed sourcing and growing their own natives. His aim next year was to have 2000 homegrown plants.

She credited both their parents for their interest in tree planting; for the first time, they had a bellbird in their garden this year, among a bund they put in with native plantings. It had taken nine years for that to happen.

Mrs Gillespie always thought the farm would not feel like their own until they started planting trees on it and put their "thumbprint’ on it.

The Department of Conservation had been on the property identifying the small native upland bullies in their pond system; the family was focused on protecting those and ensuring continued habitat.

The couple had a real passion for the environment and Mrs Gillespie saw that environmental side as a strength for them. They had skills they could use both outside the farm, as well as inside, she said.

The Ballance Farm Environment Awards process was interesting, particularly seeing the difference in priorities between the various areas. North Islanders were talking about erosion and stock water schemes - the Gillespies’ environment was extremely different.

But it was very motivating in terms of "taking people along on a journey" and seeing what others had done. They had always been very proactive with an open gates policy, hosting multiple field days and school visits.

While that could be challenging, it made them think about what they were doing, such as answering questions about why they were using plastic protection around trees. They were using more expensive cardboard now - "we’re not having plastic where we’ve got an option," she said.

Every region had its issues and Mrs Gillespie acknowledged that there had been conversations as to whether it would be easier to farm somewhere else. But the property could grow so much feed and the stock that came off it was "just stunning".

And, it was a stunning valley in which to live and the river and creeks were all part of it. Being the place that their children were growing up was also a bit of a tie.

"We don’t have any Maori history [but] we very much feel this is their river and their place and this is their future and we’re going to keep fighting until we secure it for them," she said.

They spent a lot of time at the river with the children over summer, or mountain biking above Falls Dam and having adventures.

"It’s their part of the world. For these kids ... that river is a big part of their livelihood. The assumption we don’t give a s... about the river is just so wrong and so infuriating."