Out there, living life and going places 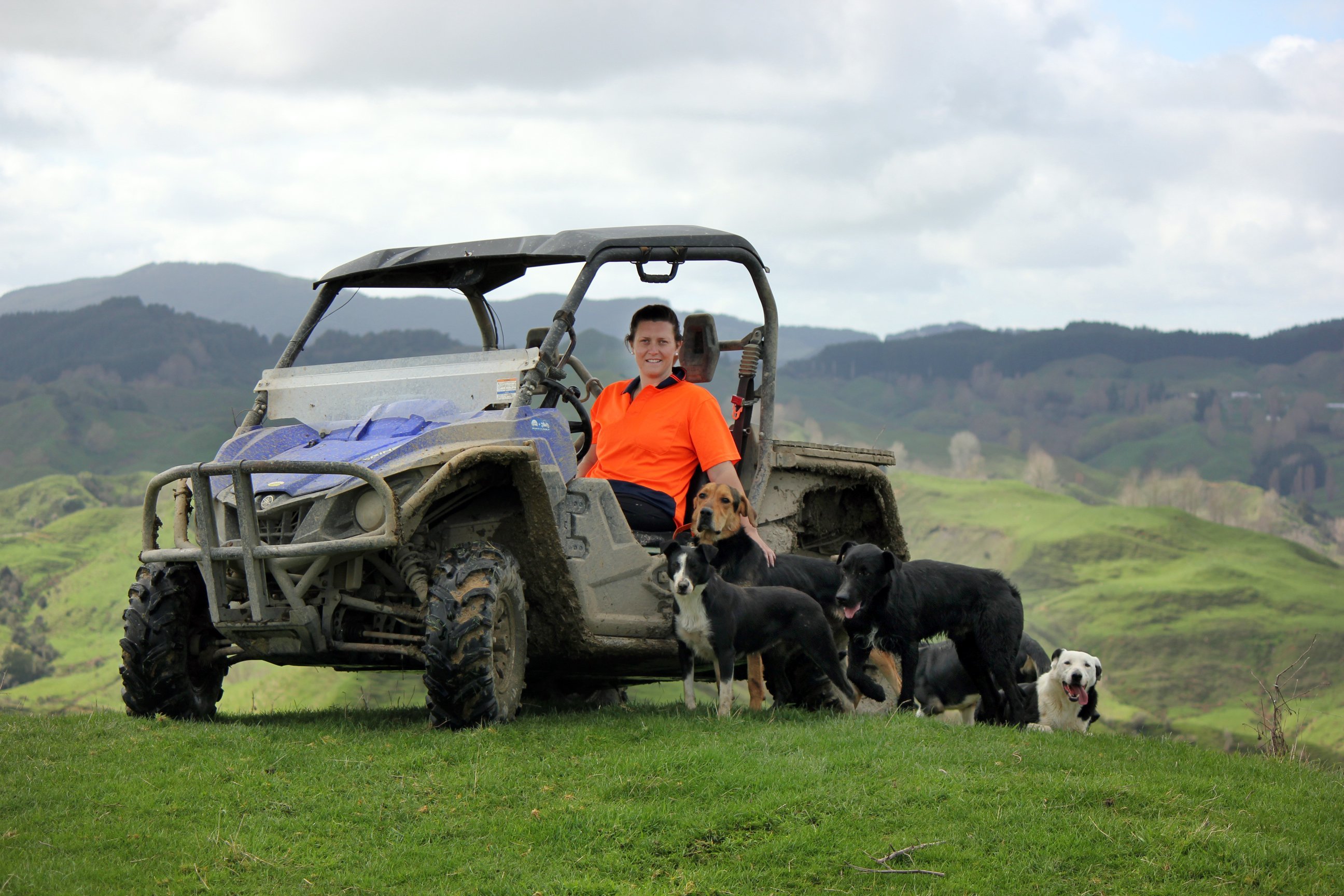 Anita Kendrick out on the farm with her team of dogs. PHOTO: SUPPLIED
Nine years ago, Anita Kendrick’s life was thrown upside down when she broke her back in a quad-bike accident while mustering sheep. Facing life in a wheelchair, she did not let her disability deter her from continuing her career in farming. Sally Rae reports.

Anita Kendrick is on the hunt for a job in the South Island.

The 27-year-old King Country shepherd said she had been keen for a long time to move south but, until now, had not had the confidence to do so. But that was now instilled and she was ready for a change.

Armed with her team of working dogs, she did not have the ideal job in mind — nor an area — although she was keen to work with sheep more than cattle, as they were more "user friendly". She was also interested in getting involved in the stud aspect of breeding.

She also knew she had to find the right employer, with an open mind, as she acknowledged how fortunate she had been with her employers in the North Island.

"I just need to find a boss who is happy to think outside the square, happy to maybe go a little bit the extra mile on a few little things here and there and accommodate me.

"I’ve been too chicken to do it until now. Even though it’ll be hard to leave, I’m ready to roll," she said.

Farming has been a lifelong passion for Ms Kendrick, who grew up on farms in the North Island where dogs, in particular, were always a big drawcard.

When not at school, she would borrow her father’s dogs and that passion for working dogs and the farming industry continued to grow.

At 16, she spent her school holidays helping several neighbours docking lambs. She had an "absolute blast" and, after returning to school for one day, she returned home and announced she was leaving.

Her father told her she had better find some work, so she borrowed a couple of his dogs, found some casual work and went farming the next day.

In May 2011, she started as a shepherd at Te Wharua Station, a Landcorp-owned property in the King Country, northwest of Taumarunui.

At Labour Weekend in October that year, she was doing some casual work on another property, earning "a bit of extra money".

Riding a quad bike, she came to a track that she didn’t feel particularly comfortable going up. She tried to find another route, before returning to the original track.

The quad bike was bigger than the one she was used to riding, she "gave it too much gas" and the bike came up and over, hitting her between the shoulder blades and breaking her back.

"It pretty much snapped me in half," she said.

While the initial minutes after the accident were "a bit of a blur", she somehow managed to get the bike off her. "I guess the old adrenaline kicked in," she said.

She remembered lying on the ground, surrounded by her dogs, as she waited for her father and the farmers she was helping, who were in the yards docking, to come and find her.

While it felt like a very long time, the reality was it was only 30 or 40 minutes before they wondered where she was and came looking.

Ms Kendrick could not feel her feet or legs and she was in horrendous pain. Her hands were tucked under her back, holding it up. She thought it was her ribs that were affected — "to me, spinal didn’t register".

When her father arrived, her arms were going to sleep and she told him to put his hands under her back and hold what she thought were her ribs, to ease the pain. But it was her spine.

She was flown by helicopter to Waikato Hospital, where she spent two weeks "not really having an idea of what was ahead" before she was moved to the Auckland Spinal Rehabilitation Unit in Otara. She was discharged on Christmas Eve.

During that time, everything was a "big question mark" around how it was going to work. But one thing was obvious — she hoped she would be able to stay farming.

Returning to Te Wharua, she recalled the first time her boss, Micky MacDonald, took her out with a couple of dogs.

She tried to muster a paddock and it was "just absolute shambles" — and she sat in the passenger seat bawling her eyes out. That was when it really hit home.

"That was a big wake up [that] this is going to be a damn sight harder than I thought, dog-wise and everything. I’m a hit-things-hard-100-miles-an-hour sort of person, I like to be busy. All of a sudden, my body was like ‘whoa ..."’ she said.

In 2017, Mr MacDonald received the People in Agriculture award in the Horizons Ballance Farm Environment Awards.

The judges highlighted the "special effort and commitment" by the team at Te Wharua to enable Ms Kendrick to work there since her accident. At that time, Mr MacDonald said she had the best dogs on the property.

She acknowledged Landcorp had been "awesome".

"At the start, I had to prove what we were doing was going to work. It’s worked amazingly," she said.

About two years ago, Ms Kendrick got to the point where she felt she had nailed everything she wanted to do at Te Wharua and she was getting a bit bored.

Needing a change, she approached Romney breeder Murray Gemmell and they took a look around his farm, to see if it could work, and she then divided her time between the two properties.

She was helping a young woman with her dogs — "She can do what I can’t do, drench and a couple of gates I can’t get. I’m her experience and her dogs and she’s my legs and arms."

Asked how she managed to make the transition from able-bodied shepherd to being in either a wheelchair or a side-by-side, Ms Kendrick said a lot of it was time, trial and error.

"There was a lot of ups, a lot of downs, figuring out what was going to work. I had to learn this thing called patience that wasn’t in my vocabulary."

But about 18 months ago, she figured out that she wasn’t as happy as she thought she was. She had turned to alcohol quite heavily and partying but, after seeing a life coach/counsellor, she had turned that around.

It was, she said, a "light-bulb moment" as she dealt with "stuff", including being bullied at primary school, and realised that she was not living a very healthy life.

She worked through those issues, instead of doing "the old Kiwi she’ll be right", and, hard as that was, she came out of the process with a totally different mindset.

On reflection, alcohol "covers a lot".

"A lot of people turn to alcohol to fix their problems. All it does is make everything worse," she said.

Now she saw life in a different light and she was a lot more driven, having figured out what she wanted and also how she should be treated.

It also involved coming to terms that just because she was in a wheelchair, it did not make her any different from anyone else.

"Only in the last 18 months, really, have I actually dealt with it and am loving myself fully. I didn’t realise how much power that actually has. I’m in a really good place," she said.

She had a good team of dogs; over the past few years, she had worked out what type of dog was going to work for her and she was breeding her own line.

"Dogs are my main tool, really; they are my legs."

Ms Kendrick took a philosophical approach now to her accident, saying there was always someone worse off — and you did not have to look far to find that.

She recently appeared on the television programme Attitude, a series that addressed the issues and interests of people living with a disability.

While she had never considered herself as a role model — "I’m out doing it, living life" — she did not realise the amount of impact that she had.

"It’s been quite overwhelming," she said.

Wow, wonderful effort and attitude. So many that are capable don't seem willing to start, and they miss out on so much life, whereas this person is making it happen for herself and others. It is so admirable what you are doing and hope to, wish you the best outcome.