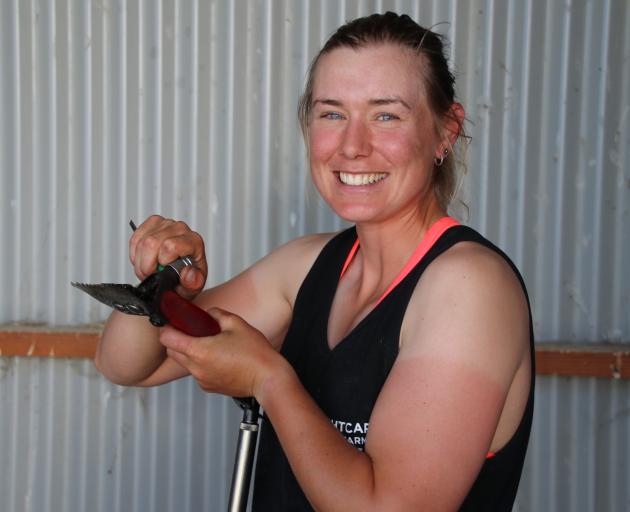 Lowther Down’s shepherd Melissa Hamilton, who came second in the junior title, tightens her shearing hand piece before the start of the competition at the 39th Northern Southland Community Shears held near Lumsden yesterday. PHOTO: SANDY EGGLESTON
A fascination watching shearers as a child has drawn one young woman into having a go herself.

Miss Hamilton grew up on a sheep and beef farm near Browns.

"When we were shearing it was the most exciting time of the year — always fascinated watching the shearers."

She attended a shearing school in 2019 but had not entered many shearing competitions.

"Just because I’m not shearing all the time it’s not ideal."

The physical aspect of the work appealed to her and also the challenge of learning the craft.

"You’re not just going to get it straight away.

"You can shear for years and still learn something."

Her father Chris had been a shearer and had taught her the basics when she was younger.

"I started off dagging ewes, did a wee bit of crutching then started shearing a few lambs."

A stint working as a rousie in a shearing shed cemented her desire to be a shearer rather than a wool handler.

The 24-year-old had been in her present position at Lowther Downs for about 18 months.

"I do shear every chance I get [but] it’s usually just stragglers or the odd one that gets missed."

She did not plan to shear fulltime as her long term goal was to own a farm.

However, she hoped by then she would be a good enough shearer to shear her own sheep.