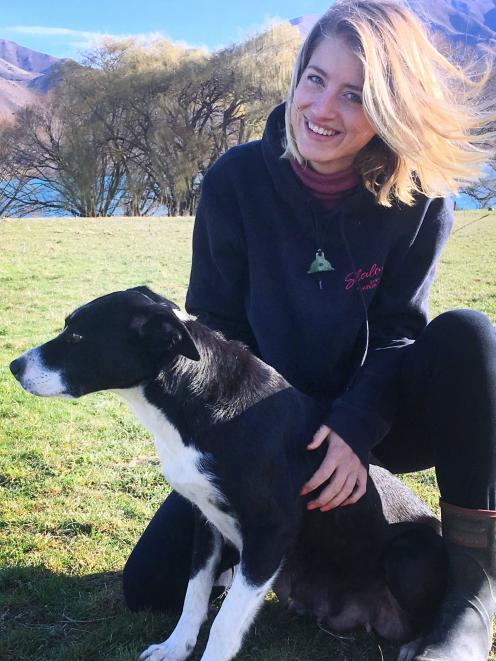 English shepherd and lamb-rearing Sophie Barnes with Fern on the shores of Lake Aviemore in the Waitaki Valley. Photo: Sally Rae
She is known simply as "Sheepish Sophie".

In the world of social media, Sophie Barnes - who has a strong following - is more well-known by that moniker.

Most recently, the young English shepherd and lamb-rearing specialist has been documenting her travels around the South Island with partner Dorrien Neeson and six dogs, working on various stations and farms.

At present stationed in the Waitaki Valley, Ms Barnes (27) admitted she had tried to find other hobbies apart from sheep farming and genetics but for her they did not exist.

Originally from Nottingham, she grew up with no interest in - or connection to - farming. It was the animal welfare and animal behaviour aspect of an animal management course she did that was to give her a huge grounding, she said.

There was a work experience component to the course and she ended up on a farm. It was lambing and the first time she lambed a ewe and put the lamb in front of its mother and it bleated, she was "sold".

"It was literally a Disney moment of `this is you for the rest of your life; these are your favourite animals'."

She got a few sheep and, within three years, had about 300 on seven different lease blocks. She was 21 and selling meat directly to customers.

She also worked as a contract shepherd and did a lot of lambing, a task she was passionate about.

She attended a sheep breeders roundtable conference run by the National Sheep Association and discovered that "everyone" was talking about New Zealand. So she decided to head to the southern hemisphere to learn more about sheep.

Coincidentally, her parents bought her sheep from her when she left and they had since bought their first farm.

Her intention had been to stay in New Zealand for two years. Fast forward four years and she was still here and had recently obtained residency.

From the moment she drove out of Auckland Airport and first started seeing hills, she knew it was "home" and where she wanted to be, Ms Barnes said.

Thanks to connections made on Twitter, she travelled around and worked on various farms, the first being Matt and Lynley Wyeth's property - Spring Valley - in the Wairarapa.

The well-known farming couple have a large-scale lamb-rearing operation and Ms Barnes found her stay there inspiring.

While in the Wairarapa, she got two dogs - Fern and Blue - which she then took on the road with her in her Suzuki - one in the front seat and one in the back.

She had a stint in Southland, which included time at both Mt Linton Station and Waikaka Genetics, before heading to Taupo to work for sheep-milking operation Spring Sheep, where she helped rear 5000 lambs.

Three years ago, Ms Barnes met Mr Neeson - he had spotted her on the cover of a farming magazine and decided he would marry her one day, she said with a laugh.

Mr Neeson, who comes from a farm near Taumarunui, got in touch and asked her on a date. In January last year, the couple decided to move in together and manage the stock on his parents' farm.

She had been plagued for years with health issues and an eventual diagnosis of endometriosis changed her outlook "on everything", Ms Barnes said. Prior to that, she thought the pain she was experiencing was normal.

She and Mr Neeson decided to do a "road trip" for a year and see how different farmers farmed - from fine-wool growers to stud breeders - and all were different.

She was now living in the picturesque Waitaki Valley and a lot of people commented she was "living the dream".

But it was not always easy as she had suffered from depression and anxiety for a long time and was very open and comfortable about discussing mental health issues, she said.

"I've been at that point I didn't want to be around anymore ... You wouldn't believe I've been in that situation. Others do see me in this awesome place," she said.

She was working on those issues and she and Mr Neeson also worked on it as a couple.

She was also keen to raise awareness of endometriosis, a condition that affected up to one in 10 women and teenage girls.

Recently, she had not been doing so much shepherding, concentrating instead on her art and also writing some farming articles.

When it came to sheep farming, it was not all about "chasing sheep around the hill" and she was passionate about genetics and also about reducing lamb wastage.

She was always very cautious with in-lamb ewes right from the start of pregnancy. From when the ram was put out with the ewe, they were treated "like the queens they are".

One of her dream jobs was being a lamb-rearing consultant as she loved lamb rearing and money could be made out of it.

An analytical person, who liked assessing situations and finding solutions, she did not want "anything to die", so she was always keen to find out what caused that - and how to avoid it.

As to her future plans, she didn't have anything definite on the radar.

"In all honesty, I just want to be happy. I'm working on that."

However, what was certain was that it would involve sheep. She not only wanted to be a good, progressive farmer herself - in the top 10% - and know her sheep were the best that they could be, she also wanted to give someone else such an opportunity in the future.

"I want to be in a position to be able to employ a junior shepherd ... I want to be able to help somebody on a farm and basically kick them out two years later and [let them] crack on and go be someone awesome," she said.

Good people were needed in the industry and she was very keen to instil the same kind of enthusiasm she had in other young people.

"So long as I'm doing something interesting and with sheep - and that I can improve something - I'm happy," she said.