Milking Shorthorn breeder Logan Kelly’s son Watson (5) proudly walks with his dad and Burness EMP Phil, at the head of the grand parade at the recent South Otago A&P Show, where the 12-year-old cow was crowned supreme animal. PHOTO: KERRI BACK PHOTOGRAPHY
Kaitangata cowman Logan Kelly was destined for a life among bovines.

His family, who have been dairy farmers on the lush Kaitangata flats in South Otago for 100 years, got interested in the milking shorthorn breed in 1987, when Mr Kelly was about 6 years old. He has been caught in their thrall ever since.

The 39-year-old showed his first shorthorn when he was 15 and by then had his first 10 heifers.

Like Jersey, Ayrshire and Guernsey cattle, milking shorthorns originated in the United Kingdom and came from the northeastern part.

"I liked them. I like the colours. They were something different."

He also acknowledged an ongoing rivalry with his Kelly cousins at cattle shows which started as all those years ago.

"They had Friesians, we had shorthorns. They probably won a lot at the start, but as we improved it’s more us that does the winning now."

The star performer of his stud is Burness EMP Phil, a pretty, red-speckled cow, who still turns heads at the matronly age of 12.

Phil was brought out of retirement because the South Island Milking Shorthorn Championship was being held in conjunction with the South Otago A&P Show in November. She not only won the shorthorn section, she was also the supreme champion animal at the show.

On one of her trips to the North Island to Feilding four years ago, she won the combined breeds. This was after a 17-hour horse float trip, where they had to take her on and off for milking.

"She still looks good for her age, and I think the judge did take certain things into consideration because of that, but her udder is still good."

Phil also led well and was pretty much bomb-proof when it came to the often times stressful environments of shows and parades. 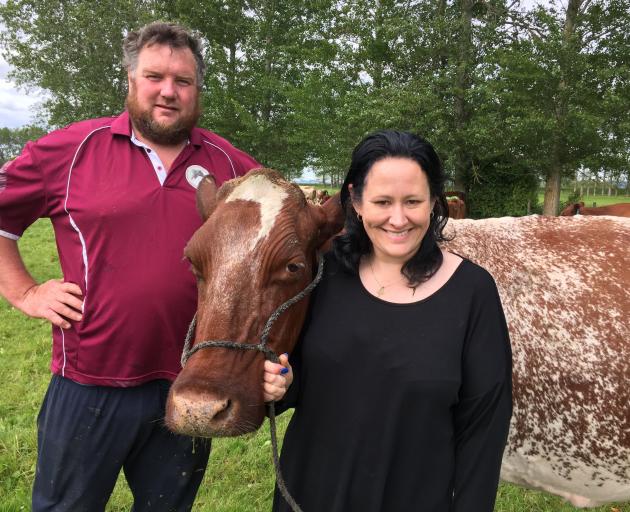 It was a proud moment for Mr Kelly, and particularly poignant when his youngest child Watson (5) broke away from his mother Nicky and insisted on walking with his dad and Phil, at the head of the parade.

"He slept with the trophy, and he ate with it. He even had a meal out of it."

Their son had already claimed half the farm as his.

"Ask him, and he’s already a farmer and a worker," she said.

The 40-year-old early childhood teacher would be taking a break next year to do environmental studies to help the farm meet the challenges of the new water quality laws.

She had long accepted that the cows came first with her husband of 10 years.

"The cows are definitely Logan’s first love, but I’ve learned to live with it. He’s even planning for her [Phil’s] retirement."

After her time in the spotlight, Phil went back to the herd of 165 milking cows, which is half shorthorn and half Friesian.

They are on target to produce 450kg milk solids per cow, the best it had been, Mr Kelly said.

"She’ll die on the farm. She’s sitting out there, happy as," Mr Kelly said.

They had not had a lot of heifers from her, and were keen to pass on her lovely disposition and traits.

"We’ll keep breeding her while she’s healthy, but she’s a pet now, rather than a production cow."

"He can love the cow better than me, and that’s OK," Mrs Kelly said.