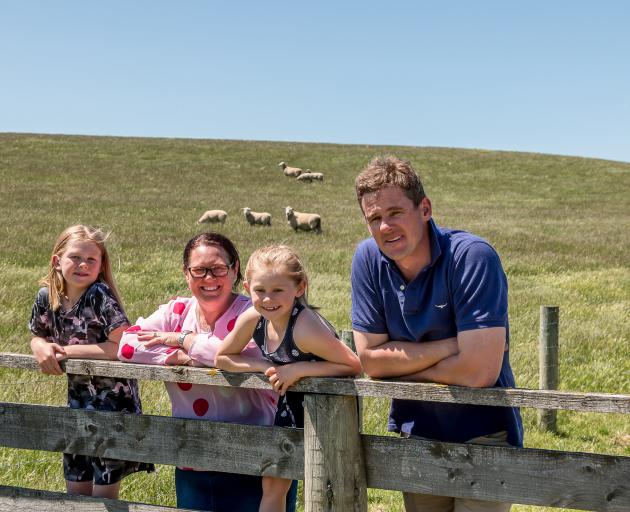 The lush long grass in this photo taken in December 2019 is but a distant memory now for James Paterson. He is pictured with wife Deborah and daughters Grace (10) and Laura (8). PHOTO: SUPPLIED
It has been a tough start to the season in more ways than one for many farmers: snow fell as lambs dropped, tucker has been tight and the Government threw some interesting new regulations into the mix, but Gimmerburn’s James Paterson remains upbeat and pragmatic about the challenges before him.

Mr Paterson and his wife, Deborah, farm sheep and beef on Kintyre Farm, near Ranfurly. They have had a long winter; feeding out started in early April and they were still feeding out as the first lambs showed up earlier this month.

The Patersons opted to hold off setting stock as lambing began to buy a few more days of growth for their lambing paddocks.

"Feed cover, as far as Gimmerburn goes, it’s not too bad; I have seen it worse.

"Southlanders might wonder just what on Earth we are up to. You can almost still see the sheep [poo] on the ground from the autumn before; it’s green but there’s not much of it. But that’s all we know in this part of the country, and you farm to it," he said.

This year, Mr Paterson said his ewe flock was well spread out to allow for the tight feed situation.

"We’ve been here before; we know what it means to get dry."

Planning ahead was key to getting through a dry period, he said.

While a few inches of snow did not spell good news for the newborn lambs on day two of lambing earlier this month, Mr Paterson said he was still happy to see it for the moisture it brought.

Winter had been incredibly dry for the Maniototo.

The Patersons had had 234mm of rain this year, and only 7mm fell in August.

"We got 18mm, which was just what we needed. We had a big drop of lambs that night of the storm but we didn’t take too much of a hit, thankfully."

The couple have been kept busy with a daily lambing beat around the 4000 Romdale ewes.

Any ewe that had lost its lamb was shedded off and the good candidates were brought back to the yard for mothering on to orphan lambs.

They were also in the middle of shearing the farm’s 900-odd hoggets, he said.

"The hoggets will get a few days to acclimatise and then they have a few hours’ walk out to a lease block in the Sow Burn Gorge, where they will stay until December."

With a full farming calendar and the next pivotal job always just around the corner, Mr Paterson conceded the freshwater rules that came into play this month were a distraction he did not need.

"It’s been quite disheartening, to be honest. It’s ideological, uninformed nonsense by a bunch of people who don’t know farming," he said.

"The talk about it since appears to be pretty constant. I must admit some days I just listen to a bit of Spotify rather than the radio, just to get a break from it."

He had confidence in the organisations working on behalf of the farming community.

"They appear to be making some headway with it."

Meanwhile, he said he would "keep the head down, bum up" and get on with running the farm in the best and most environmentally sustainable way he could.

"And if it all turns to custard and the Government doesn’t listen, well then, I hope we [farmers] can all come together and make ourselves heard as a united front," he said.