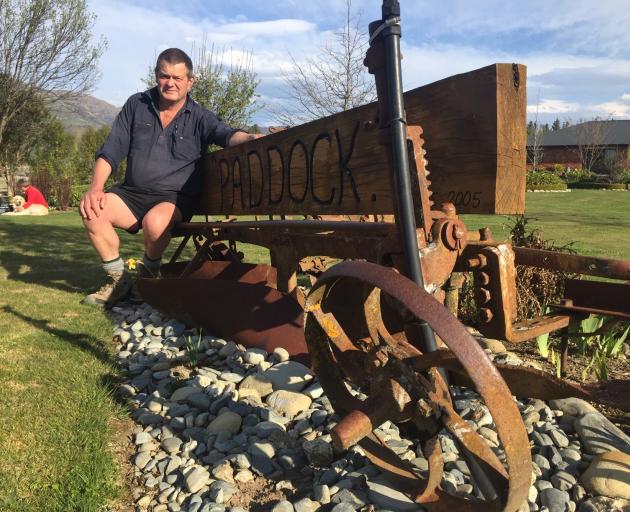 John Osborne, chairman of the Upper Clutha group of ploughing enthusiasts, which is hosting the 2028 World Ploughing Championship, at the entrance to his his home in Lake Hawea beside the first plough he ever bought. PHOTO: MARY-JO TOHILL
In the 1990s, when John Osborne was in his late 20s, he bought a plough for $10.

He took the vintage Reid and Gray horse-drawn piece home, got rid of the rust, shone it up and got it to go.

His father had taught him the art of ploughing and he was keen to compete. He was already a member of the Waimea Vintage Machinery Club at Riversdale in his native Southland and so he converted his old plough so it could be pulled by a vintage tractor.

Superseded by a more modern version, it has nevertheless occupied a place in Mr Osborne’s heart for the past 30 years and in the process reaccumulated some picturesque rust.

"That plough has followed us to every property we’ve ever been."

For the past 15 years it has occupied pride of place at the entrance to The Paddock, the Osborne family’s property at Lake Hawea — just a few kilometres from the home of the 2028 World Ploughing Championship.

As chairman of the Upper Clutha group of ploughing enthusiasts, which is hosting the event, it has crossed his mind he could brush up his skills, qualify and take part. He has the distinction of having competed in three of the four ploughing disciplines — vintage, silver and reversible — at various nationals during his ploughing career, but hasn’t competed since moving to Lake Hawea 16 years ago.

"Yeah, I have thought about it, but nah, I won’t be giving it a crack. As chairman, I want to concentrate on running it, but you never know, I might end up being a judge."

By the time the champs roll around, he’ll be a year off 65.

"After all this, I’ll definitely be ready to retire."

The former farmer, who now operates an agricultural spraying business from his Lake Hawea base, will be using his know-how to help the Urquhart family, the owners of the champs venue, prepare the paddocks for the world-class competition, which will feature 60 of the world’s best ploughers.

"Ground conditions are everything. At the moment, it’s planted in lucerne, but three years out from the event it will be sprayed, ploughed and planted, half in some cereal crop and the other in grass."

It was three years ago that the first ploughing competitions were held in the Upper Clutha.

"Some of the Southland guys suggested putting a match together. We’ve got good soil — it’s beautiful to plough. They couldn’t believe how good it was. We usually get good weather — they get some crap in Southland, so it planted the idea."

At first, they thought they’d never be able to pull it off.

"Bear in mind that by then, we’d only had the third match, but the Urquharts offered up the land. We’re going to be on 82 hectares. It’s pretty rare to have enough room to hold the event all in the same paddock, and it’s dead flat."

Mr Osborne has never been involved in organising something this big, which will involve 10 days of competition and will include the New Zealand nationals.

"It’s going to be quite a unique event just because of where we are. We want to give them something to remember."