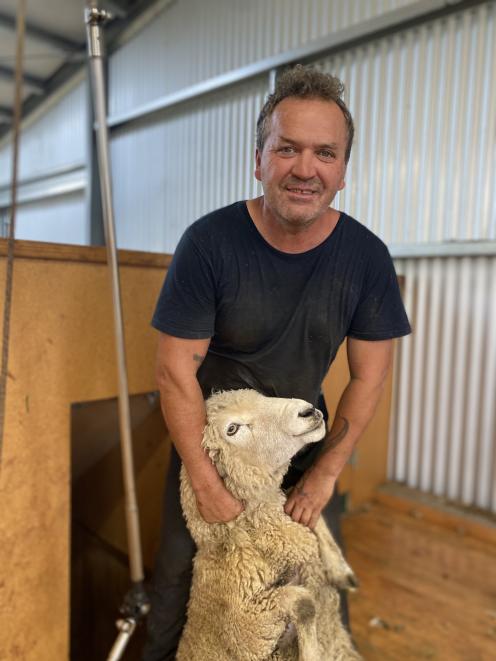 Kiri Whangapirita likes to work seven-day weeks in the busy months of the year. PHOTO: ALICE SCOTT
The old saying that everyone has a story to tell couldn’t be more true for Kiri Whangapirita. Alice Scott talks to an interesting character who has worked hard to create a life of financial freedom and a few fond memories along the way.

As the late January days finally grew warmer and the return to school tinkered on the horizon, many farming families were finally finding time to take a day or two away from the farm, meanwhile Kiri Whangapirita was working seven-day weeks.

Flipping between his weekday job as a self-employed stonemason and the weekends crutching for the Peter Lyon Shearing gang, Kiri has always enjoyed the hard toil of a seasonal lifestyle.

"I’m definitely not one to think weekend to weekend, I am more long-term than that," he said.

"I like to go hard for a few months at a time knowing that the winter is coming up and things will get a lot quieter — it’s how I have always been."

Kiri’s father was a shearer, but he said it was never a desire to become a full-time shearer himself.

When he left New Zealand as a 17-year-old, he told himself he would not follow in his father’s footsteps.

He did end up learning to shear when he went to England, and it was a skill he said had always opened up job opportunities when he needed, but it had never been a mainstay occupation.

"Shearing is in the blood, but it’s not in my heart."

Stonemasonry was a more appealing occupation, he said.

He could remember as a youngster enjoying landscape work and spending his days outside.

He learnt the trade on the job and had been self-employed for 18 years, working around the Central Otago region.

"They both have their benefits.

"I like that they are two jobs where you are getting paid to keep fit.

"With crutching, I enjoy the people contact, dealing with farmers and we see some amazing countryside."

The choice to work seven-day weeks had not been out of necessity; Kiri said he managed to set himself up in his early 20s working on deep sea trawling boats in the North Sea.

He did that for seven years before coming home and purchasing 20 acres of bare land on the outskirts of Alexandra.

He recently subdivided and sold them as 5-acre blocks.

The off-season from the trawling boats allowed Kiri time to travel the world.

"I made it to 110 countries in total and got to experience some amazing cultures."

Kiri is now making plans for the colder months.

He owns some land near Gisborne which is covered in native bush and leased out a honey producer.

"I’m going to head up there and do a few improvements around the place ... there will also be some stone work to do for people no doubt."

While the option to go OE was off the cards for young people at present, Kiri said his advice for those deciding on their next step was to focus on the positive.

"Always surround yourself with positive people and be prepared to work hard.

"I think those two things will mean a person will always succeed no matter what path they choose."