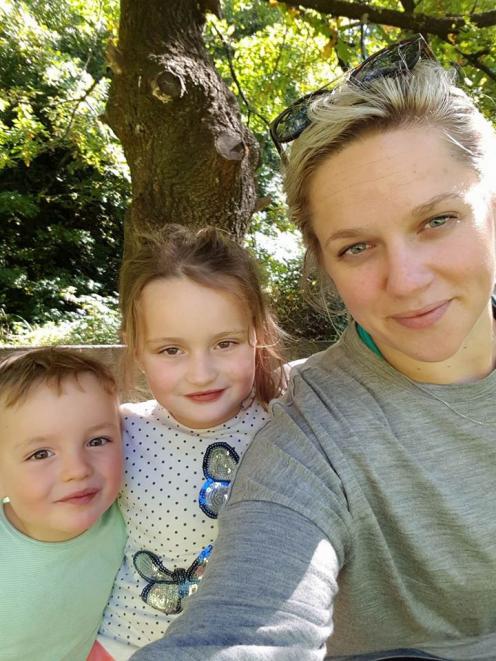 Chanelle O’Sullivan with children Hunter and Izzy. Photo: Supplied
She calls herself a  multipotentialite.

Primary industries advocate Chanelle O’Sullivan wears a lot of hats and there is so much more to her than her Instagram handle, Just A Farmer’s Wife, would lead you to believe.

Indeed, she is a farmer’s wife, but she is also the mother of two energetic young children, an entrepreneur, a social media specialist, a futurist and someone with a never-ending source of ideas.

"Wherever I see anything, I see an opportunity," she said.

Now she is getting excited about her latest venture —  a business that combines her passion for the primary industries and technology to highlight New Zealand’s produce, careers, environment and skills.

Virtual Insight aims to connect food and fibre producers with food and fibre consumers, both nationally and globally, while also highlighting the opportunities in the sector to school pupils.

Mrs O’Sullivan has also been working with industry on a mental health campaign around women — there were a lot based around men, which was necessary, but it was time to make sure women had support too, she said.

And it has all been a little bit of a whirlwind, packed into 29 and a-bit years, including getting engaged at 21, married at 22, and having her first child at 23.

Daughter Izzy (6) was now at school but Hunter (3) was home two days a week, so she only had the opportunity to work between about 10am and 2.30pm three days a week. Other than that, her work hours were 8pm until 11pm, she said.

The good thing was she was not "dragged into farming" having met a farmer. She had that interest before she met her future husband, at Mackenzie Young Farmers Club, a month after moving south.

She lived in "suburbia" until she was about 17. After leaving school, she completed a certificate in agriculture, having previously ridden horses in her school holidays.

She moved to a high country station near Lake Pukaki to work as a shepherd — an environment vastly different from working in a doctor’s office and a pet shop in Auckland.

A later dairy farming stint gave her a well-rounded view of the agricultural sector, and was followed by three years of veterinary nursing. Mrs O’Sullivan became involved with Farming Mums NZ,  an online support group for farming women. It now had more than 10,700 followers.

From there, different media opportunities arose and people had told her she was her own brand, something that she had not really considered.

"It kind of all happened by default," she said.

In 2016, Mrs O’Sullivan completed the Kellogg rural leadership programme,  and the experience drove her to do more for the primary industries in New Zealand.

She admitted she was the sort of person who saw a problem and  worked out a solution, rather than just complaining about it.

When it came to launching a business, she had lots of different ideas — it was a matter of finding one that "gelled correctly".

Virtual Insight came about because Mrs O’Sullivan felt there was a need to be "showing people what we do rather than telling them".

It  was about using technology to show New Zealand’s products, from farmer and grower to plate and shop.

People were doing such successful and innovative things in the sector, from smaller companies doing craft milk through to the likes of Lanaco, which produces filters from New Zealand wool.

Using a drone, tripod or body-mounted 360deg camera, an entire environment could be captured in photo or video form.

A VR headset could then be used by the consumer to immerse themselves in the environment shown, or use their phone’s 360deg capability to go on an adventure.

They could be virtually transported to the top of a mountain ridge on a high country station, amid a mob of sheep, and hear the shepherd whistling and dogs barking, with Aoraki-Mt Cook in the background.

Or the consumer could be in the sheepyards, with sheep moving around them, or  in a factory to see wool being turned into a filter medium.

Hearing the emotion and passion in the producers’ voices and why they did what they did really provided that connection to them — and gave Mrs O’Sullivan "goosebumps".

It provided a whole different angle that was not usually accessible, she said. It was taking people back to where the product came from and showing traceability through systems, and transparency, while capitalising on New Zealand’s "awesome story". It could be applied to any product, whether it was meat, vegetables or kiwifruit, Mrs O’Sullivan said.

She had been working for Grass Roots Media NZ but was giving that up to focus on Virtual Insight.

Rather than  doing the filming and editing herself — "the last thing I want to do is sit in front of a computer for hours on end" — she was taking a producer role, having formed a joint venture with Auckland-based firm Method.

Mrs O’Sullivan was buoyed by the support she had received and interest in the initiative, and it was something she really believed in.

The O’Sullivan family live at Waitohi, in South Canterbury, and Mr O’Sullivan manages a cropping farm.

With 15 staff, and growing between about six and eight different crops, it was an all-consuming role that involved working 70 to 90 hours a week. Mr O’Sullivan  was determined to be part of the Virtual Insight project but had been kept too busy with work, she said.