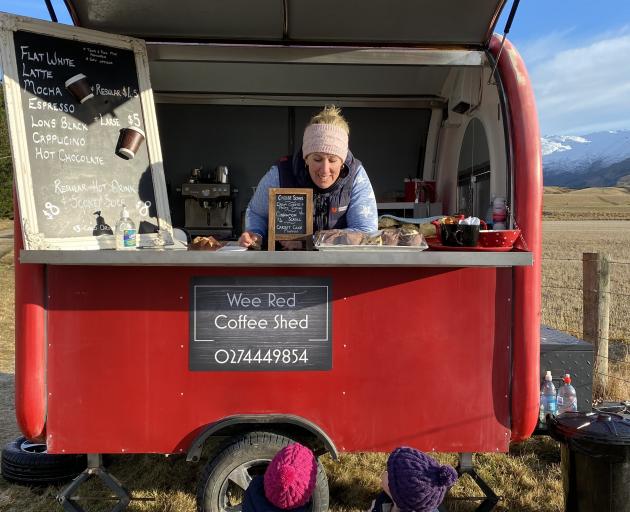 Stacey Weir has ventured into business ownership serving coffee and treats at the end of her driveway near St Bathans. She is pictured serving Zoe and Imogen Guthrie (both 1) of Ranfurly. PHOTO: GEORGINA GUTHRIE
It’s a tractor, it’s a train ... nope, it’s a coffee cart sitting on the side of the road, in what some might consider the middle of nowhere.

After moving to St Bathans in Central Otago three years ago, from her home town of Ranfurly, Stacey Weir noticed a steady stream of cars that would pass her house on Loop Rd.

"It’s the most popular way in and out of St Bathans for many tourists who prefer to stick to tar-sealed roads," Ms Weir said.

The idea of owning a coffee cart was something she had thought about for a while she said, and when she found a little caravan online she decided to give it a go, stationing it at the end of her driveway.

Buying the caravan just prior to lockdown, Ms Weir made good use of the time at home to sort out all of the consent paperwork required to run a coffee cart.

"There’s actually quite a lot to it. You can’t just park up and start serving coffee."

Unsure how busy the road would be as the country moved into Alert Level 2, Ms Weir decided to "give it a crack anyway". She has been pleasantly surprised just how busy she has been.

With nothing but animals and farmland around her, she said many drivers stop mostly at first out of curiosity.

"They slam on the brakes and take a sideways look at me. They find it quite unbelievable that someone would have a coffee cart all the way out here," she said.

"There’s a lot of tradespeople, and other agents that use this road a lot, as well as all the domestic tourists that have been out and about."

Locals too, have cottoned on to her open hours of 9am-1pm on a Monday and Friday, taking advantage of a nice coffee and scone or slice.

"I get tractors with silage wagons, utes, side-by-sides — it can be quite the smoko hub sometimes.

"I feel I have seen more of my neighbours in the last couple of months than I have in the three years we have been living here.

As Central Otago’s temperatures plummeted to well below zero in July, Ms Weir said "things did get a bit chilly", but brazier heaters were put outside the caravan alongside her seating.

She has three children, and partner Paul Dougherty is happy to be on dad duties on the farm with their youngest while she is working.

"I love the people contact and the sense of purpose I feel from it — it’s nice to have my own focus. And if it’s not busy, then I just love the peace and quiet", she said.

Ms Weir has been mindful not to overcommit to the business; she has been asked to attend a number of events, but has so far turned them down.

"I like the flexibility it offers as it doesn’t interfere with the kids’ activities."

On starting a hospitality venture post lockdown and with young children, Ms Weir says it was a risky little move that has paid off: "it’s been awesome so far, and it can only get better and easier from here".