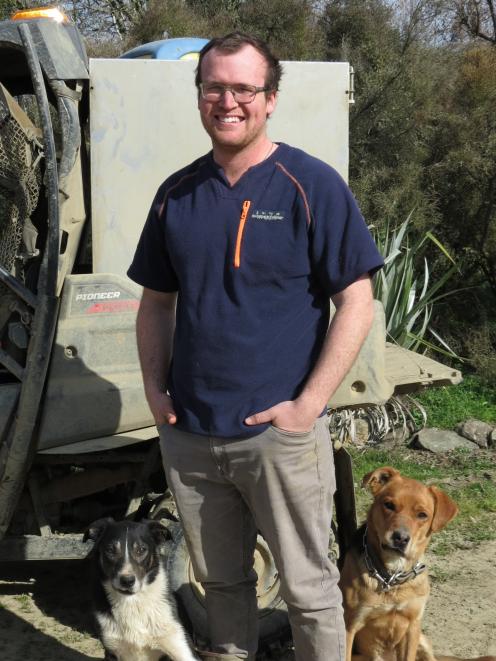 Senior shepherd Matthew Day, of Te Houka, pictured with Max and Oak, is using the $5000 Silver Fern Farms' plate to pasture scholarship to go towards studying for a Massey University agri-commerce degree, majoring in farm management, in February next year. Photo: Yvonne O'Hara
Although Matthew Day comes from an Auckland ''townie'' background, he knew he wanted to go farming - and the move has paid off.

Mr Day is a senior shepherd on the Pamu-owned (Landcorp) finishing property Dawson Downs at Te Houka, near Balclutha.

He was one of six recipients awarded a $5000 Silver Fern Farms plate to pasture youth scholarship.

''I was selected for the lower South Island [region] and I am going to start a degree in agri-commerce through Massey University, majoring in farm management, in February next year,'' Mr Day said.

''It is a three-year full-time course and will take me five to six years part-time.''

He said the property manager Tom Dalley had completed the same study programme and encouraged him to do it.

Mr Day said the Silver Fern Farms' conference, where the scholarship was presented, was ''an eye-opener''.

''There was a wide range of topics, and a lot about marketing access to China.''

He has worked for Pamu since leaving Telford where he studied for his certificate and diploma in agriculture for two years.

''I am an Auckland townie with no rural background at all,'' he said.

He attended Mt Albert Grammar School and enjoyed working on the school's farm.

''I thought I would give farming a go and went to Telford.''

He then became a junior shepherd at Pamu's Kepler property near Te Anau.

''While at Kepler they promoted me to senior shepherd but I thought it was about time for a change so I came here.''

He said he enjoyed working for Pamu (Landcorp).

''They are pretty good. They look after you.''

He has been on the farm for about five months.

When not working, he enjoys hunting and cricket, and is looking for a club where he can play darts.

His partner Emma Shirley has several horses and competes, so he helps with those.