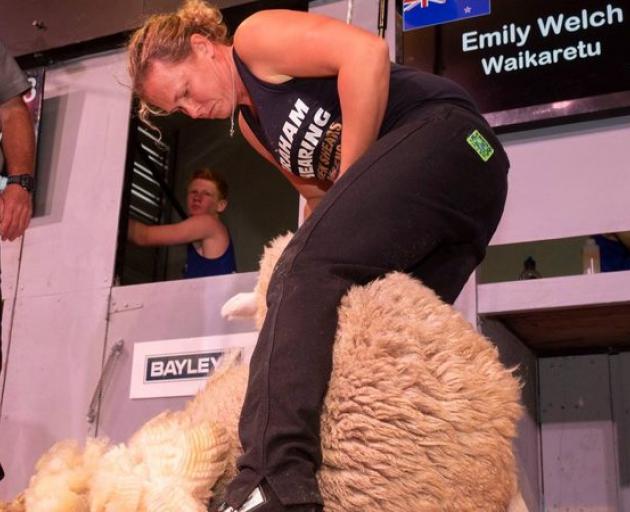 Waikato shearer Emily Welch won the first Golden Shears event for women yesterday - after pushing organisers to include women at the 59th championships in Masterton.

The 39-year-old from Waikaretu, who runs a shearing contracting business, holds the women's world record of 648 lambs in nine hours.

The mum-of-four was the instigator of the event, which pitted six of the best-performing women in Golden Shears Open, Senior and Intermediate heats in what Welch hopes is the first step towards eventually establishing a Women's World title.

A Golden Shears organiser, Phillip Morrison, said her ambition to have women included in World Championship contests might be spot-on.

"There's a place perhaps maybe in future world championships there could be a women's section. I was in France last year, they have a lot of women shearers."

Emily Welch also starred in the docu-movie about women shearers 'She Shears'.

It was the sixth time the 32-year-old had won the title. It equals the tally of early-years Golden Shears household name Brian Snow Quinn, who won five times from 1965 to 1972.

Phillip Morrison said Smith had won every competition he had been in this year.

"Obviously he was the favourite. He topped the heats, he topped the quarter-final, and he topped the semi-finals so that tells you something about his ability ...it's quite rare for someone to do that."

Smith will represent New Zealand at the world championships in France in July.

Joel Henare also successfully defended the other major title at the event - with a record 7th Open woolhandling title, all of them in a row.