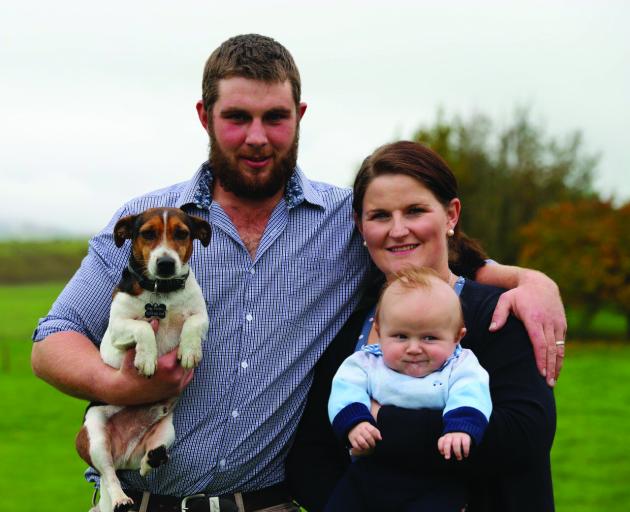 Cameron Russell with wife Katie, son Lachie and Geek. Photo: Beef + Lamb New Zealand
Cameron Russell is living proof that the sheep industry has a lot to offer young people with the right attitude and a willingness to succeed.

At 26 years of age, he is married with a child and working as stock manager on Southland's Diamond Peak Station.

Mr Russell has worked as a shepherd and then block manager on two high-profile properties where he has honed his practical skills and knowledge.

After leaving boarding school in Dunedin, Mr Russell went to work on Haldon Station in the Mackenzie Country then on Whitecoomb Station in West Otago before taking the more senior role at the 1214ha, 11,000 stock unit Diamond Peak Station two years ago.

Having spent eight years building his practical skills, Mr Cameron said he was now working on developing his knowledge of agribusiness and putting himself up for leadership roles.

Last year, he completed a Generation Next professional development course run by the Southern South Island Sheep Council and this year he applied for - and was awarded - a role as a B+LNZ sheep industry ambassador.

Mr Russell said he felt there was a lack of capability coming through the sector at a practical level.

''I feel school leavers are often encouraged to go to university, but the farming industry still needs people on the ground to do the work.''

Mr Russell said he loved what he did and

would like to see other young people enjoy the lifestyle and work satisfaction he received.

As a sheep industry ambassador, he was looking forward to seeing farms around New Zealand, meeting new industry leaders and picking up ideas which he could implement.