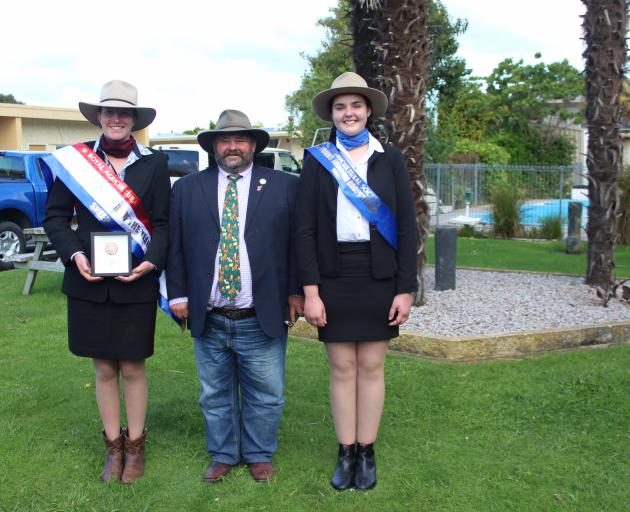 Young southern sheep and dairy judges did well at the Hawke’s Bay Royal A&P Show in Hastings. Lisa Bonenkamp (left), of Greenvale, won the New Zealand Meat Breeds Sheep young judge of the year and placed second in the beef young handlers class. Julie Skedgwell (16), of Tuatapere, was reserve champion in the dairy judging (cows and calves) competition. NZRAS Southern Districts treasurer Rob Hall, of Waikaka, congratulated them. PHOTO: SUPPLIED
Even though Lisa Bonenkamp works with Hereford cattle and knows a thing or two about good beef, she also has a good eye for sheep and proved it by winning a national title recently.

The experience is all part of the skills she will need when she eventually owns her own farm and runs her own stud.

She was also second in the beef young handlers class.

She and Julie Skedgwell, (16) of Tuatapere, represented the New Zealand Royal Agricultural Society southern district in the beef, sheep and dairy competitions.

Julie was named reserve champion in the dairy judging (cows and calves) competition.

They were selected to represent the South at a training and judging workshop at Rob Hall's property earlier in the year.

At 22, Ms Bonenkamp is a general farm hand for Waikaka Genetics, Greenvale, near Gore.

She has worked for Laurie and Sharon Paterson for about three years.

"I do anything and everything," Ms Bonenkamp said.

"I have had incredible support from the Patersons and they have encouraged me to have a go."

While in Hastings Ms Bonenkamp met someone she knew who was part of the Rauriki Charolais stud, and offered them a hand with their 15 cattle at the show, for further experience.

"Fifteen cattle is a lot to keep track of," she said.

She admitted she was nervous before the announcement of placings, but was delighted when she heard the results.

She had to judge and rank four animals in each of two different classes and while winning had given her more confidence in her abilities, the public speaking component was nerve-wracking.

"I have to give my opinion, [about why I ranked them as I did] and talk into a microphone in front of a crowd."

Ms Bonenkamp has been selected as a travelling reserve for the New Zealand team competing in the World Hereford Conference Young Breeder competition in Queenstown in March next year.

In addition to gaining more experience in her job, she is broadening her skills and knowledge.

"I have a couple of people lined up to talk to especially around judging prime cattle."

When she is not working she is a member of the Waitane Young Farmers Club, enjoys playing touch and netball and likes to spend time riding or going out with friends.

"I also want to go overseas and definitely have my own farm when I came back and I want to have my own stud," she said.