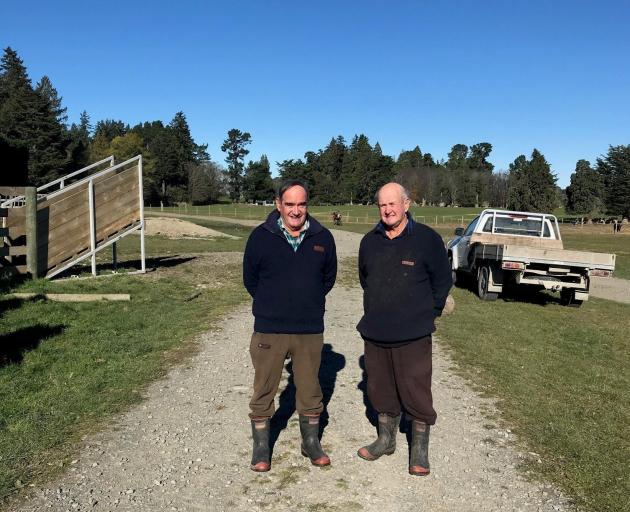 Farmers Bob and Alan Johnston are giving back to their community through Advance Ashburton, which included the purchase of a mannequin baby for training at Ashburton Hospital. PHOTO SUPPLIED
The face of philanthropy is changing as a growing number of everyday New Zealanders like brothers Bob and Alan Johnston, of Carew, are seeking to make a difference with community foundations.

The brothers, both in their 70s, grew up on the family farm and have contributed to many community projects over the years, and say giving back to the community is their legacy.

After running a sheep farming business, which was converted to dairy, they eventually sold the farm around 2008, and went into semi-retirement.

They still live on farm, and help out where needed.

Advance Ashburton was one of the country’s first community foundations established. It was set up by the late-Neil Sinclair in 2003, and the funds, under management, have recently passed $16million.

Upon the sale of their farm, Bob and Alan found themselves in a new financial position with some discretionary income and, about this time Advance Ashburton was in its early years.

“Advance Ashburton Community Foundation is all about advancing Ashburton; we want to see our community foundation be successful for our district for the long-term,” Alan said.

They liked that their gifts would be invested, grown, and given back to their community forever.

And they decided to give in three ways through Advance Ashburton: providing scholarships for promising young medical students, direct funding to current community needs and, eventually, through a gift in their will.

“It was put to us early that not only could we leave a bequest but also do something in our lifetime,’’ Alan said.

‘‘We get real pleasure from seeing what our money is achieving today, so we put it to others, ‘Why don’t you do something to see your money working while you are still here?’

‘‘We have found it very fulfilling to give in this way”.

They also have a scholarship fund which pays income every year to medical students in the district.

“We started with one scholarship per year and now there are six, each paying around $3000 a year. The great thing about it is that we know a lot of these families and it’s wonderful to see how it’s helping young people with big aspirations,” Bob said.

The recipients are very grateful, and the brothers enjoy hearing from them as they progress through their studies.

“Kiwis really like this model of giving in a strategic way to communities,” she said.

Advance Ashburton can help those considering leaving a gift in their will, and it was important to get the wishes down in writing, to clarify and formalise matters to make the process easier for loved ones.

The Johnstons are also involved in other community initiatives, such as funding training equipment for Ashburton Hospital and other immediate needs, such as Kai for Kids.

“We thought food for kids wouldn’t be needed in Ashburton, but we are all hearing real stories of how it is needed today,” Bob said.

“We are happy to give to that, when you hear about and can see the real need.”

“Our old Dad used to say, ‘If you are in a position to help, you should’. That’s how we’ve always felt about this. The Foundation is so well organised and has always brought in the right people to look after the money, it’s a great organisation and we are happy to be a part of it.”