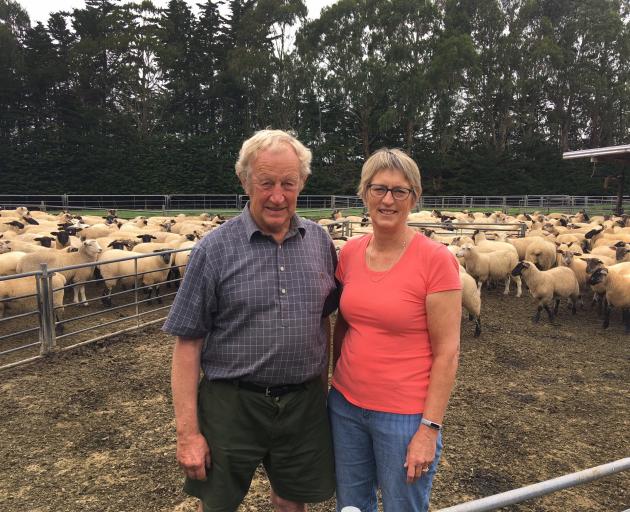 Doug and Jeannie Brown are holding dispersal sales from their long-established Punchbowl sheep stud. PHOTO: SALLY RAE
For more than a century, the Punchbowl name has been synonymous with stud sheep breeding in North Otago.

But a new chapter is looming for its current owners, Doug and Jeannie Brown, who are holding ewe dispersal sales in Oamaru this month.

It was Mr Brown’s grandfather Henry (HJ) Andrew — a legendary figure in the stud sheep industry — who came to Punchbowl, near Maheno, in 1915 after graduating from Lincoln College.

Originally from the Leeston area, he shifted south with his parents and began breeding Southdowns. Over time, his Southdown stud became very prominent at a time when Southdowns were the main terminal sire breed in New Zealand. He exported sheep to many parts of the world and also imported sires.

In his later years, he held a very successful annual sale at the North Otago A&P showgrounds before dispersing the Southdowns in 1978. He had also established a Poll Dorset stud in 1970.

After his death in 1985, the Punchbowl property was run as an estate until 1989 when Doug and Jeannie Brown bought it.

The Poll Dorset stud was re-established while a Suffolk stud, established in 1977 by Doug and his brother Andrew, was transferred to Punchbowl.

Numbers were built up through the 1990s to give more selection pressure and, in 2000, Texel sires were purchased to establish both the Suffolk-Texel and Poll Dorset-Texel studs. Stud ewe numbers peaked at 1300 in 2017 when just short of 2000 stud lambs were tagged.

About 150 Suffolk ewes and 400 Suffolk-Texel ewes will be on sale at the Waiareka saleyards, in Oamaru, on February 15, starting at 1pm, along with ewe lambs and stud sires.

The following week, on February 22, 80 Poll Dorset ewes and 500 Poll Dorset-Texel ewes will be offered, along with ewe lambs and stud sires.

Mr Brown, who acknowledged he was probably always destined
to be a farmer, said one of his farming highlights had been moving to Punchbowl.

He also recalled topping the trifecta of stud ram fairs in New Zealand — the North Island, Christchurch and Gore sales — for Suffolk rams one year.

There had been many changes in the industry over the years and, probably the biggest change for the Browns had been the move into cross-breeding.

The decline in sheep numbers, particularly in North Otago, had affected ram sales although they were now selling over a wider area, including clients in the Strath Taieri. Rams would still be available for sale next year.

Mr Brown has had a strong industry involvement, including with Federated Farmers, as a farmer-elected director of Alliance Group from 2001 to 2015 and as a long-serving Otago regional councillor, stepping down in 2019. It was probably winning the grand final of the Young Farmer of the Year contest in 1984 that gave him some profile which led to other opportunities, he said.

With the couple’s two children, Simon and Alice, not pursuing careers in farming, it was time to move on to the next chapter in their lives, they said.

Agents were reporting strong interest in the sales and it was a time where good lamb prices were being achieved, there was grass around and the outlook for sheepmeat was also strong, Mr Brown said.

Mrs Brown, who did not come from a farming background, had provided strong support. She also works part-time in Oamaru as a physiotherapist.

She laughingly recalled how her rural knowledge had a "watershed moment" back in 1996 when her husband headed overseas for a six-month Nuffield scholarship.

It was in the days before cellphones, she was at home with a 6-year-old and a 4-year-old, and the farm worker left.

Mr Brown travelled throughout Europe and the United Kingdom, looking at the meat industry, while his wife figured out how to fix leaking troughs and deal with problematic electric fences.

"I’m not sure what he learnt, I reckon I learnt more at home here," she laughed.