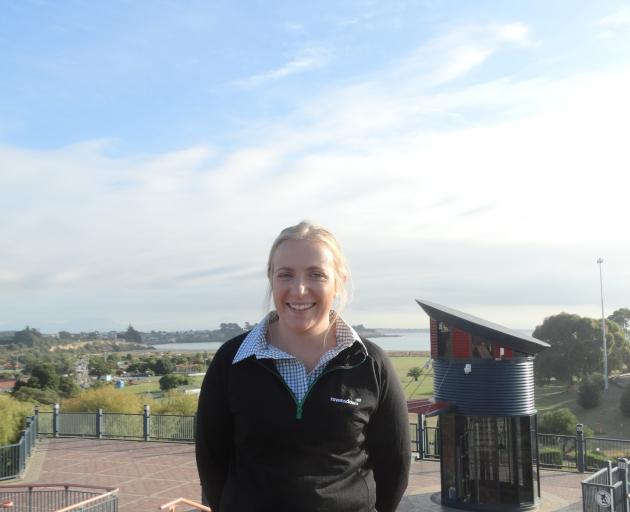 Ravensdown agri-manager Hannah Wallace grew up in a family of farmers in the Waikato and now works in Timaru. PHOTO: NATASHA PARRANT
The agriculture scene has been ingrained early on in the Wallace family.

Timaru-based Ravensdown agri-manager Hannah Wallace grew up on a sheep and beef farm at Pukeatua, near Te Awamutu, in Waikato.

Her sister Alana Wallace is a crop monitoring co-ordinator for PGG Wrightson and her other sister, Louise Wallace, is a farm investment consultant for FarmRight.

Hannah Wallace went to boarding school in Hamilton and then completed an agri-commerce degree at Massey University, in Palmerston North, as economics and accounting were her stronger subjects.

She has worked for Ravensdown for nearly five years.

Based in Timaru, her role often required travel around the South Canterbury region.

Her parents and sisters still live in the North Island. She said she often talked to her family on a regular basis and aimed to visit her parents, who were dairy farmers, at least twice a year.

This year she was visiting home more than normal, attending university friends’ weddings as well as her sister’s wedding this month.

Being used to living away from home since boarding school meant Miss Wallace did not get homesick, which made living independently a lot easier, she said.

Her family on her father’s side influenced her to stick with agriculture as her father, grandfather and great-grandfather had all been farmers.

She hoped if she had children they too would have an interest in agriculture.

Her father started farming at the age of 16 and had been involved in agriculture for 45 years.

She thought the farming lifestyle was a very tight-knit community and supported those interested in pursuing a career in it.

Having a supportive upbringing, she was confused as to why more people were not learning about agriculture like they used to in the past.

She suspected it could be because more people were living in town. The girls she boarded with, who she still kept in touch with, were mostly country girls, but all except for one had moved to cities for a new lifestyle.

Prior to university, she thought she wanted to be a banker, but realised she enjoyed face to face interaction with others, like in the role she had now.

It was also a bonus to be able to get out on the farm most days. "Every day is different, it’s very seasonal".

At the moment, she was dealing with cropping farmers, but in spring it would be sheep and beef farmers.

Aside from farming, Miss Wallace wanted to travel overseas but due to Covid-19 affecting the borders, she had to "just go with the flow".

She wanted to go to Europe and the United Kingdom particularly and was fortunate enough to have travelled to those places already about three years ago. "I’m pretty lucky".

Her other interest was F45 fitness, as she enjoyed the social aspect of it as much as the intense circuit training.

One day, Miss Wallace would like to go back to her parents’ farm to "see different ways of doing things".