Taking the lead on water

Andrew Curtis has no interest in "getting back to old Blighty".

The affable English-born chief executive of Irrigation New Zealand (INZ) is happily settled in Canterbury with his family. 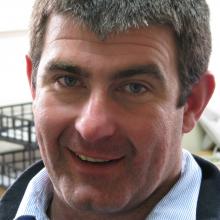 Mr Curtis’ stint in the country was initially only expected to be temporary — on the way back to the UK from a year in Australia — but morphed into residency.

His role was a good fit for his skill-set which included a varied involvement in the primary sector.

In the UK, he studied environmental management at university and then worked in conservation management, which included restoration of habitat and wetlands.

He managed a trout fishery, stocked with rainbow trout, with a wild brown trout fishery on one of the arms of the lake.

A rowing club also used it and the lake attracted "masses" of visitors, and much of his time was spent managing the different interests.

Prior to leaving, Mr Curtis was involved in the restoration of an old estate in South Devon, restoring both the built heritage and the land to its "former glory".

When his wife wanted to travel, the couple headed to Australia and he had various jobs in the rural sector.

He helped out with wheat harvesting — which was an "eye-opener" — going from small farming operations in the UK to working in 500ha paddocks in Western Australia.

"It was a completely different concept, it blew my mind away," he said.

He mustered on a massive sheep and beef station and worked in the table grape, citrus and tulip industries.

The couple moved to Hawkes Bay in 2001 where Mr Curtis worked for the Yummy Food Company before he was offered a job in land management at the Hawkes Bay Regional Council.

The role morphed during his time with the council and, when he left, he was strategic adviser for water.

The Hawkes Bay Regional Council voted last year to move on from the scheme after much controversy.

The $330 million irrigation project would have involved building a 7km long dam to provide a secure water supply, particularly for landowners on the drought-prone Ruataniwha Plains.

One of the biggest frustrations in Mr Curtis’ life had been where that project went, as he regretted that  some people had not understood how it came about.

The genesis was four farmers who, when faced with new minimum flows on the river, got him along one day having realised the only way forward was storage.

They looked at small-scale storage on their farms and realised that was going to be quite an expensive option, and they also realised that, over time, others would be affected by the minimum flows.

The project’s concept was born as they looked in the surrounding hills to see if larger water storage could be done.

The beginnings of the project were "very, very genuine" in what it was trying to achieve. It was a "better win" for the environment, would maintain what existing farmers had and also underpinned the community itself.

In 2009, the Curtis family shifted to Canterbury, where Mr Curtis took on the top job with Irrigation NZ.

INZ is a national membership organisation looking after the interests of irrigating farmers, growers and the industry professionals that service them.

When he began in the role, there were just a couple of staff and there was a "bit of a plan" as to what needed to happen.

It was quite reactionary and advocacy-focused, but there was a realisation there was going to be a need for best practice to developed.

Over time, that had been done and once those standards were established, the focus needed to be on how to get  them carried out.

Training was identified as key because there were some large capability gaps. The initial focus was on irrigators and then on the skill-set of the service industry and how to build capability to build the professionalism of the industry, and that was now largely done.

There were now NZQA qualifications and career pathways in the industry. Companies were proud of being accredited and were investing in training and building capability in their staff and it had been a "stunning change". There were 52 people  attending training sessions in 2009-10 and that was up to 785 in 2017-18, which he was very proud of.

Now, the focus was back on irrigators to establish good management practices. Tomorrow, Good Farming Practice: Action Plan for Water Quality will be launched.

It supported all farmers and growers to implement good farming practices that would improve New Zealand’s freshwater quality.

Irrigation New Zealand had sometimes been labelled a lobby group, wanting irrigation everywhere. But that was not the case, and so many people did not realise "all this other stuff" that it was doing in the background, he said.

Standards did not stand still, technology was changing all the time, and at the same time, there was an advocacy role in trying to explain and promote and help people to understand irrigation.

It was important to be open and transparent and people could "make up their own minds", Mr Curtis said.

INZ was not shy in saying there were some things that happened that had not been sensible; that some places should be looked at  to determine whether there should be irrigation there at all. It included certain landscapes and land types and there needed to be mature conversations about those.

In areas like the Mackenzie Basin, farms had to remain viable but the type of landscape had to also be recognised, he said.

Technology did bring challenges; he was frustrated when some said that variable rate irrigation was the "solution to everything" — it was a solution that worked for certain people in certain places.

Mr Curtis was "quite excited" about the future under the present Government. There was no doubt some of the pastoral sector under irrigation was having to have a "hard look" at what it was doing.

It was about recognising where the challenges were and where research and investment needed to go.

He was an advocate for diversity in the agricultural sector.

He believed there was greater room for farms to  work together more co-operatively.