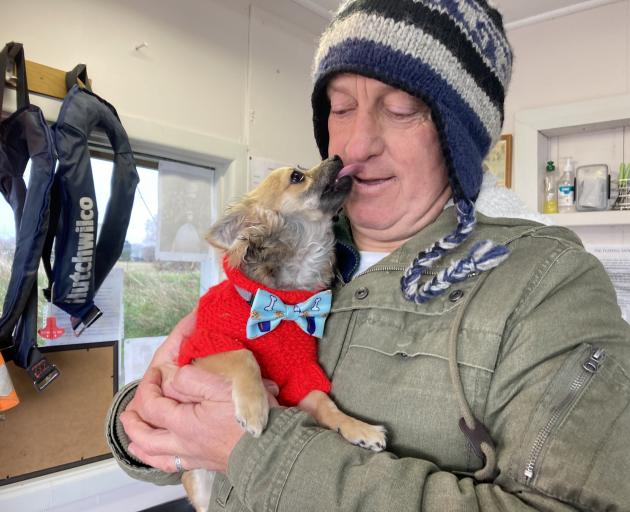 He sports a very nice bow tie, and his cable-knitted coat is British Lancastrian red in deference to his master’s English origins — perhaps even reflecting the side Mr Jones might have taken in the 15th-century War of the Roses.

With a Star Wars-inspired name and Mexican roots, Yoda the chihuahua has taken to rural river life like guacamole to tortilla chips or a duck to water, in much the same way as his owners, Mr Jones and his wife Vicki Yarker-Jones, of Tapanui. 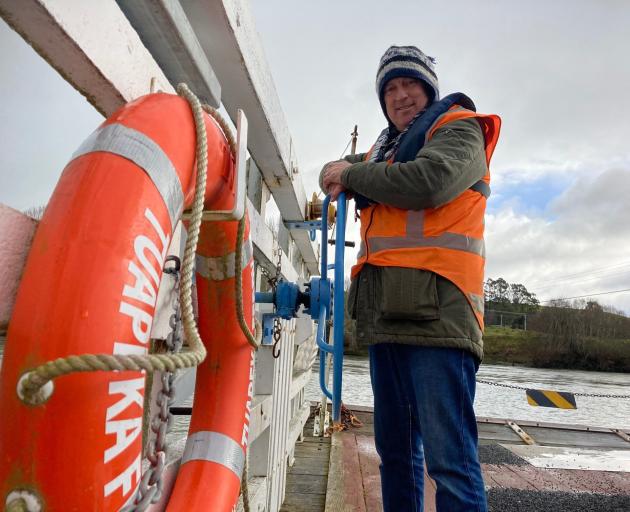 Tuapeka Mouth punt operator Tom Jones.PHOTO: MARY-JO TOHILL
The 7-month-old pup recently joined the House of Yarker-Jones and has become a charming addition to the Tuapeka Mouth enclave that operates the historic 125-year-old punt on the Clutha River.

That Yoda is very portable and can fit in a pocket is a bonus. ‘‘He’s been on the punt and seems to enjoy it, but I don’t let him roam — don’t want to find out if he can or can’t swim, or whether or not I can or can’t have kittens. It’d freak me out.’’

Mr Jones’ road to Tuapeka is as eccentric as you might expect from someone who decided to buy a church in a flood.

‘‘We were the only ones mad enough to come out,’’ he said.

‘‘Any sensible person would have stayed at home,’’ Ms Yarker-Jones said. 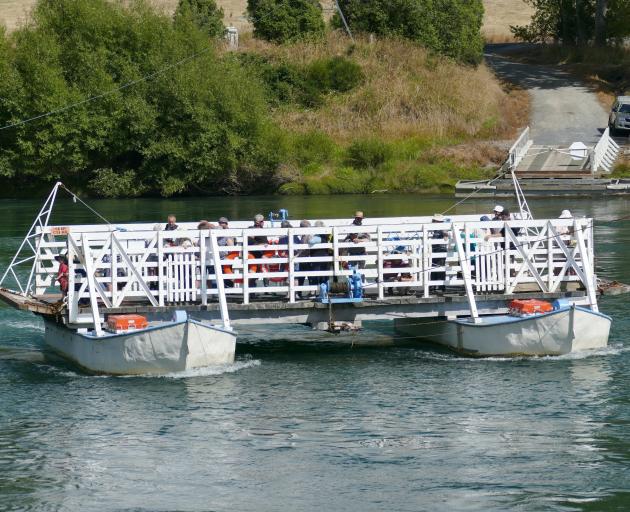 The 125-year-old Tuapeka Mouth punt carries visitors across the Clutha River at the recent jubilee celebrations on Waitangi Day.PHOTO: RICHARD DAVISON
They purchased the former St Augustine’s Church in Tuapeka about three years ago. It was meant to be. Mr Jones is a keen beer maker and St Augustine just happens to be the patron saint of brewers.

It was not long before one of the main ferry operators, Fiona Lomax, was eyeing up the practical Pom as a possible punter. A year later, he was trained and at the helm for SouthRoads, which operates the punt for the Clutha District Council and the New Zealand Transport Agency.

Ms Yarker-Jones, who is also a capable operator, said negotiating the punt was ‘‘like trying to drive a double-decker bus across Lake Wakatipu on a gondola’’, such was the skill required to angle the craft into the swift Clutha flow.

The punt is a simple construction. The floating bridge is really just a large platform sitting on two boat-shaped pontoons.

She said her husband

never tired of talking about it, which had been bringing Covid-restless New Zealanders to the Clutha River’s shores to try out the famous ferry in their droves.

They described the punt as a ‘‘working, living and moving piece of history which is part of the roading network’’, and like most Tuapeka Mouth-ites, were passionately protective of it.

‘‘It is a piece of history and I just love operating it, and it is unique, as the only one of its kind in the southern hemisphere. What’s not to like about it?’’ Mr Jones said.

‘‘And I love how it is a tourist attraction but it still has a practical use, and is still used by farmers in the district to get stock across the river.’’

The 59-year-old former gasfitter, originally from Bolton, between Manchester and Liverpool, took a punt himself coming to live in New Zealand.

He got sold on the country by the 1990 Toyota television ad Welcome to My World, sung by John Hore Grenell, ‘‘and seeing all those open vistas’’. It brought him on holiday with his former wife nearly 30 years ago.

By 1992, they were living in Wellington, where Mr Jones continued gas-fitting trade.

His love affair with the South began on a trip to Dunedin, which led to yet another move.

By then, he had met Emerson’s Brewery founder Richard Emerson and went to work for him, becoming the deaf Dunedinite’s ‘‘ears’’.

He went on to found the Green Man Brewery in Dunedin and then his own brand, Crafty Beers, and did a degree in ecology in between.

He and his wife divide their time between Tapanui and Tuapeka.

‘‘Punting and brewing are a beautiful mix.’’