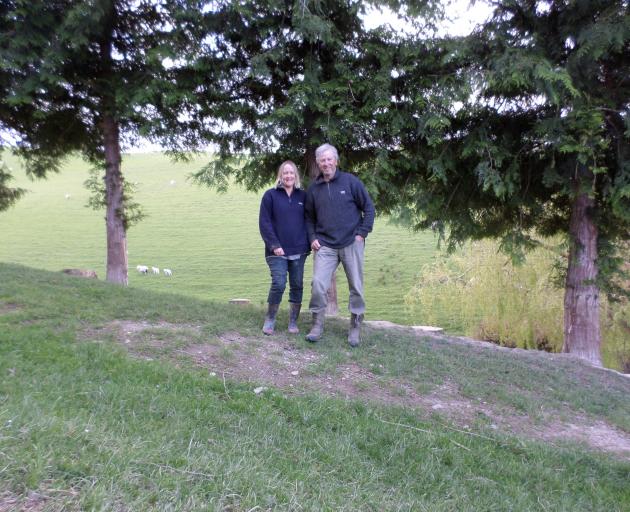 Lynda and Allan Casse spent many years working in city jobs in order to reach their goal of farm ownership. PHOTO: SUPPLIED
From growing up in the city to farming in Tuapeka West; Alice Scott talks to a couple about their own unique journey into farm ownership.

Allan Casse got his first taste for farming as a boy in his school holidays.

He was born and raised in Auckland city and his mother, who grew up on a farm, would take him out to the countryside.

"The outdoors appealed right from the beginning. I just loved it. It’s where I knew I wanted to be."

He then moved to the South Island as a 17-year-old and worked in a fruit and vegetable market for two years before going to university and qualifying as a teacher.

After he met Lynda, the couple set about their goal of farm ownership, both working full-time in Dunedin: Allan as an intermediate teacher and Lynda in an insurance office.

"We bought a 22-acre [8.9ha] block in Waitati and we also leased a bit of land nearby. It was a pretty busy old time. We just got into a habit, I suppose; we would get up early and get in an hour or two of work on the farm before we needed to be in town for our jobs. It went on like that for quite a few years before we had our first child."

Working full-time and saving both of their incomes helped the couple’s savings goals tremendously.

"We were a bit older when we had our children, which by no means is the best way to do things, but that was how it went for us."

"I guess we just went into a saving mentality. We didn’t buy into consumerism; we made do with what we had. I am pretty sure we were one of the last people in the country to buy a colour television.

"That’s not to say we weren’t social people; we enjoyed getting out and having a bit of fun. We were probably the last ones to go home most of the time," he laughed.

Allan also did possuming in the winter school holidays.

"It didn’t pay that well but it was something I enjoyed and I wasn’t spending money while I was doing it."

Finally, after 11 years and just before the birth of their second daughter, the couple saw an opportunity to buy Mavora Downs, a 260ha farm in Tuapeka West, near Lawrence.

It was a dream come true for the couple, who could finally stop rushing "here, there and everywhere" and focus on the one occupation they loved.

"Lynda is just as much the farmer as I am. We work alongside each other every day, which I concede for some is a hazard in itself but it’s worked well for us.

"We had a pretty good test run learning to farm at Waitati but certainly there was a few learning curves when we took on a bigger place. One thing we have always valued and appreciated is the advice and discussions we have had with friends and acquaintances in the farming sector.

"We also value the expertise of local contractors. Creating a profitable enterprise based on efficient sheep genetics was our first priority and always will be."

The couple also have a strong emphasis on their farm environment. Since buying the farm in 2000, they have planted shelter belts and stabilised the steep ground with poplars. A "dirty big gully" of gorse and broom was quickly eradicated and 24ha of radiata pine trees were planted.

"I have developed a passionate hate for gorse and that’s the way it’s got to be to keep on top of it," he said.

Twenty years on, the couple’s two daughters, Merran and Sam, are in their early 20s and have left home. The couple love the community they live in; both are involved in local organisations and Allan also volunteers as a first responder for St John.

"It’s important to get off the farm and find ways to destress. Like most people involved in farming, it can be a challenge to find a balance between the two."

For a couple so clearly driven and industrious, they agree it’s good sometimes to stop and appreciate the now: "looking at what we have done as opposed to what we haven’t’’, he said.

"Farmers are very self-critical and there is always going to be something out there to pull us back down to earth just when things are starting to feel a little too easy. Farming breeds a pretty resilient person who learns how to endure a few headwinds. It’s important to enjoy the moment and be proud with what you’ve done so far," he said.