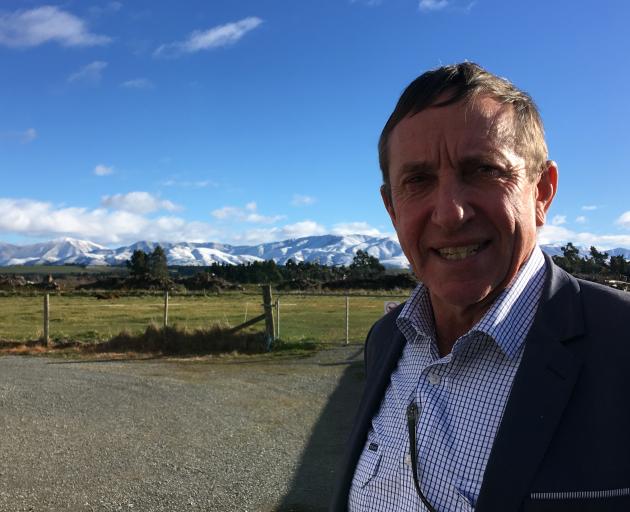 The Resilient Farmer author Doug Avery says life is full of peaks and valleys. Those highs and lows are a normal part of life. Photo: Toni Williams
"You can't go from mountain to the next mountain without going in the valley,'' says farmer and author Doug Avery.

Rural Mid Cantabrians were encouraged to ''take a break'' with the trio as they spoke of their life experiences - the ups and the downs.

From front-line policing during the 1981 Springbok tour, reaching rock bottom farming in drought-stricken Marlborough to cracking open emotions, they shared it all.

All three spoke of the importance of having a mentor, or a support network of people to help when times were tough.

While their delivery methods were from different places and different times, the message was the same: no-one can do it on their own. It was entertaining, engaging and meaningful.

Former Ashburton policeman Pup spoke of his experiences in the police force and dealing with work issues.

In an effort to protect his family, he did not talk about those issues at home.

But it had the opposite effect, and they were in the dark about reasons for some of his behaviour.

''The only one I was fooling was myself. I seek help now for my wellness,'' he said.

People had different methods for dealing with stress, but they needed to work and be safe for all concerned, especially loved ones.

''Life isn't a straight road ... when you're in the valley it's hard to see the way out, but there is, and [eventually] there's another hill.''

It was a sentiment shared by Doug, Marlborough farmer and author of The Resilient Farmer, and professional counsellor Struan Duthie.

Doug followed in the footsteps of his father and when things got hard, you worked harder.

Farming in rural Marlborough during drought-stricken times was tough. Doug took on more and more and, at his peak, he crashed and hit rock bottom.

The human fear of failure was responsible; he retreated.

In his recovery he learned to ''let go of stuff''and focus on what he could control.

Doug used the flying formation of geese to support his advice to ''never fly alone''.

Geese flew in a V formation, he said. One goose took the lead, but those behind were constantly honking, offering sounds of encouragement. When the lead goose needed a break, another goose took over at the front.

Doug said those at the front needed support and encouragement.

''Never fly alone. Fly the V formation all the time and know who's in that V,'' he said.

He encouraged people to take a helicopter view of those they had a relationship with in good times, and those they could call on when times were bad.

If this was left until things got hard, it was too late.

''Build up resilience in good times because when stuff goes wrong, you need to know who's going to be there,'' he said.

Life had peaks and valleys

and the valley was the more important, as it was a great opportunity to start planning the next peak, he said.

''You can't go from mountain to the next mountain without going in the valley.''

Doug said it was more dangerous when people gave up.

Those who noticed others facing difficulty should get alongside them and help them create their next story - don't comment on the story now, he said.

Struan agreed and said soft knowledge (emotions) and dealing with emotion was just as important as hard knowledge, or facts.

''Everyone needs someone to talk to; to be human is to be vulnerable.''

A lot of people did not deal with their emotional side but would benefit greatly if they did.

He also encouraged people to reach out and make contact with others to talk to.