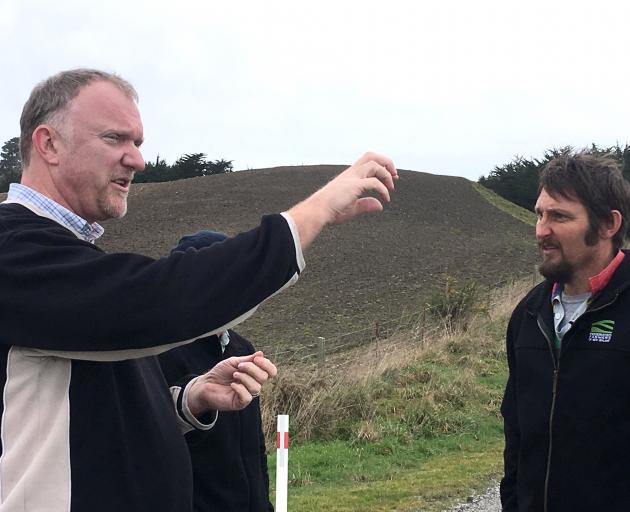 With a background outside of the farming industry, the Otago Federated Farmers president acknowledged he might have a different approach from some farmers.

It had been something he had been wanting to do since taking over the role earlier this year, he said — to get ORC staff on farm to see first hand the practical steps he was taking around water quality.

They had the chance to see how the regional water plan was being put into action, and have open discussions about questions specific to their farm.

Originally from a farming background in Taranaki, he shifted south seven years ago for "opportunities", Mr Davies said.

He liked sheep and moved out of dairy country to buy the 750ha sheep and beef property, 15km southeast of Milton.

From when he arrived, he had an interest in water quality and  was a fan of the Otago Regional Council’s water plan, as it meant  farmers were in control of their own destiny provided they met the outcomes of the plan.

He was  keen on that approach and  wanted to see more farmers embrace it. If they did not, then central government might eventually intervene.

He was also keen to both support the regional council and get farmers on board "doing what they need to do" so they could control their own destiny. Mr Davies completed a food technology degree at Massey University and later worked in the seafood industry. That included five years of travelling around the world, working in seafood processing plants,  after which he ran a wet fish plant in Nelson for Sealord. He also bought a small food-processing business in New Plymouth.

His experience meant  he was used to dealing with staff, health and safety, quality assurance and compliance "stuff" and he possibly had a slightly different outlook from other farmers, he said.

Practices had changed since he first started farming Coombe Hay and it was more than just fencing off waterways, he said.

Water quality was  only one of many factors. Provided farmers thought of all factors — and not just water —  they would end up with a much better result and also make farming easier.

There was more than one reason to put a fence in a certain place and there could be "lots of wins out of it", Mr Davies said.It took a long time to work out how to achieve what he wanted; thinking about stock management, stock movement, water quality and getting the most out of pieces of land.

He had upgraded the water scheme on the farm, which was now completely independent, and installed about 50 water troughs.

It was a progression; when opportunities came up, such as a fence needing to be replaced, then he looked at the options.

On many farms, fences were in the "wrong places" because of farm development in earlier years to give stock easier access to water, in the days before reticulated water schemes.

But things had changed and it was now a matter of reverse engineering. After farming in that manner for 100-odd years, it was only in the last 10  anyone had been thinking about water quality.

He had also fenced off and retired an area of native bush, planted about 12,000 trees, put a public walkway along the river and sampled his water twice a year through a catchment group. He had employed a full-time farm worker as his Federated Farmers and other off-farm roles were taking some time.

He was usually off-farm three days a week; not only with Federated Farmers but he was also involved with the Clutha Development Trust and Beef + Lamb New Zealand farmer council.

He expected the debate over water in Central Otago would also  take up a fair bit of time. Water use past 2021 for owners of deemed permits, or mining licences/privileges, required them to apply for a replacement resource consent.

Land values could be dictated by the amount of water and potentially it could put some landowners in an untenable position. And it was not just farmers who were affected; wine-growers and orchardists also needed water, he said.

To "wind back the clock" was going to be very hard and it had already affected land values in the region. There would be some farmers who would not be in a position to do a water storage option in the short term.

Mr Davies said he was "open to conversations".

"Yes it’s part of my role but I also have a real interest in this stuff," he said.

He was very pleased  the ORC staff accepted his invitation, as he could not see it being anything but a good thing.

People could not be expected to make decisions that could seriously affect people’s livelihoods without them understanding the reasons for justifying those decisions.

He identified one area which was what he called a "grey area" — if he had to get consent to do the work, then that would cause some resistance. As well as the time involved with that, it would also cost him money.

So if that happened, then it probably would not happen and stock would continue to go through the swale. But if there was a digger going past — and he already had the pipe — then he could put a culvert in.

On grey areas like that, farmers needed to get some definition from the ORC as it was very hard for them to make decisions. Clarity would help.When it came to his top tips around water quality, he gave his top one as water troughs in paddocks.

"If you make it easy for stock to get to water, they will go there."

That was followed by fencing of waterways and keeping stock out of them, and then shelter, followed by paddock selection and cultivation.

"I haven’t gone and got a degree on all this stuff ... I’ve learned this ... through practice. If I’m doing something wrong, I’m more than happy for people to tell me," he said.

Video footage was taken of the visit and a video would be made on tips for farmers about changes they could make on their farms.

"Simon showed us some great initiatives he has carried out on his land that are straightforward and easy to do, and it’s great that he is happy to share these."

Seeing the water plan in action and having those discussions with Mr Davies would allow the council to work even more collaboratively with both the farming and urban communities "as we all work towards every river in Otago being swimmable".

Mr and Mrs Davies will host a farm forestry field day on their property on November 23 and water quality will be one of the topics covered.