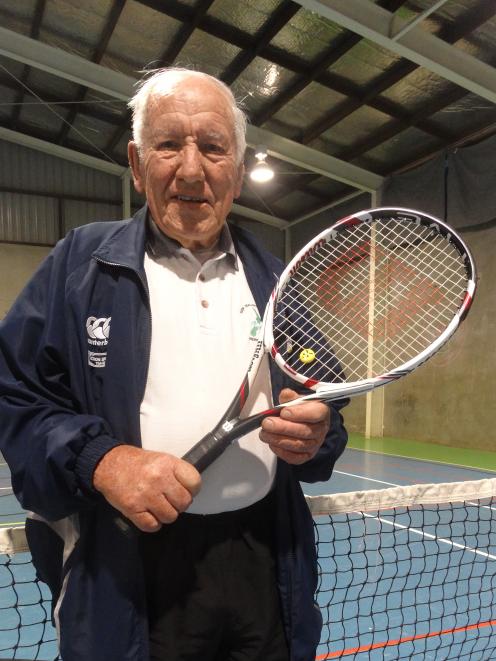 Terry Taylor is all set for another winter night's tennis. Photo: Chris Tobin
Terry Taylor has just turned 84 but the semi-retired Pleasant Point farmer is not slowing down any time soon.

Every week, winter or summer, he can found on the tennis courts playing for up to three hours on Wednesday evenings indoors and on Saturday afternoons at Timaru's Waiti-iti Tennis Club for a similar period of time.

In the warmer weather, depending on how the mood takes him, he might go out for another bash on Sunday.

''I started playing tennis at 40 after playing badminton and decided to give it a go.''

At that stage, Mr Taylor and his wife Adrienne were dairy farming in Northland.

''I started with business-house tennis. A few of us cockies got into it; we drank a lot of booze, played a bit of tennis, acted the goat and I stuck with it.

The Taylors moved south in 1999 and took up a 162ha beef farm outside Pleasant Point and bred horses which they continue to do.

''I sold most of my farm to a cow cockie but we've kept breeding horses.

''We breed about four or five every year. It's more the wife's hobby and I do the work.

''We've made a lot of friends and gone all over New Zealand.''

One of their pacers, Sleepy Tripp, won a New Zealand Derby.

''We won three-quarters of a million dollars with him. We took him to Australia where he got second in the Victoria Cup and won just about every race as a 3-year-old.

Mr Taylor said he kept playing tennis because he loved it and it gave him the chance to mingle and mix with people.

He didn't have any strokes which stood out in his playing repertoire.

Fellow player Graham Kirke said Mr Taylor was ''crafty'' on the court and played quite a few drop shots which was a hangover from his badminton days.

As to his secret to keeping active, Mr Taylor said it was simple: