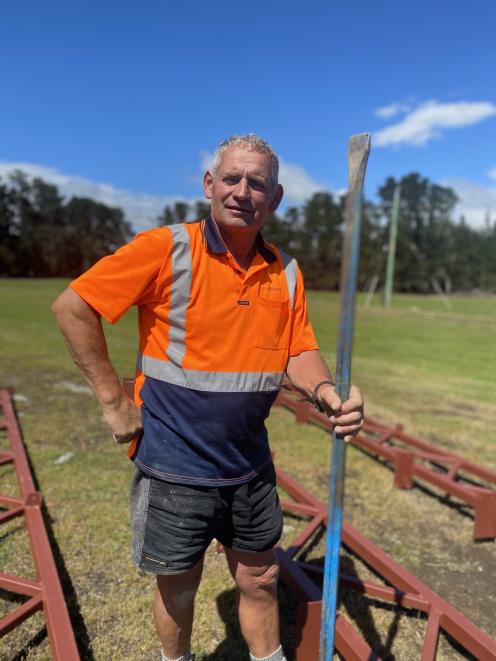 Mr Mathieson (61) started out with Calder Stewart at the age of 20 and, apart from a short stint working on commercial builds in the late ’80s, he has enjoyed a career as a foreman specialising in woolshed builds.

Being based in Milton, Mr Mathieson and his crew will travel up to an hour and-a-half for work and in his early years he would often stay away.

“I probably stay away for one job a year, but I’d like to think I am mostly done with that now. After all these years, I am allowed to make that demand,” he laughed.

A build that stands out in Mr Mathieson’s memory is a five-stand woolshed at Minchmoor Farm at Lee Stream.

“It had a massive grating. The biggest grating we have ever done. I can’t quite recall the exact size, but off the top of my head it was about 900sq m.”

Another build was a woolshed at The Branches Station located at the top of the Shotover River.

“The road to get in has a lot of sharp hairpin corners, so all of the building materials had to be made half size in order for the trucks to get around the bends. That was quite an interesting build.”

Like all industries, the development of machinery has led to a vast improvement to the efficiency of a build and a much safer work site.

“I cringe to think now how we used to do things. Timber trusses were built from scratch, and we would walk a lot of it up a ladder. The farmer was involved in the build a lot more than they are now, they would be there with a tractor and bucket.”

Nowadays the sheds are made with steel trusses that are delivered on site ready to be hoisted and bolted into place.

“We were limited by the length of the timber. Woolsheds could only span five metres for each side. Now with steel trusses, seven metres is the standard and there’s options to go bigger.”

These days a four-stand woolshed is the common size and almost all the new builds are flat-board.

Mr Mathieson has enjoyed getting to know the farmer clients and in the early years they would sometimes stay at the farm while the build was under way. Breakfast, lunch, tea, and the smokos in between were served by the farmer’s wife. These days the homemade scone has been replaced with their own packed lunch and thermos.

Work ethic is something Mr Mathieson has always had and installed into staff working under him. He prefers to get up early and be on the tools before 8am, so they aren’t getting home late. He expects the staff that he picks up to be ready to go in the morning.

“Waiting for people in the morning is a pet hate of mine. That’s a good indicator of what type of worker you have; if they are ready and waiting in the morning.”

His advice for young people keen on a career in a trade is to do a pre-trade course when they leave school before starting an apprenticeship.

“They come with a stronger skillset and are a lot easier to train on the job.”

Despite his enjoyment of the job, Mr Mathieson is looking forward to retirement.

“The body doesn’t handle the cold days quite like it used to.”

Not one for idle time he laughs that his wife probably won’t appreciate him saying he will spend his retirement cutting firewood.

“She has started a dog grooming business, so I will help her with that.”

Hunting, fishing and whitebaiting are high on the agenda, as is spending time with his grandchildren.

"I am sure I’ll find enough to do to keep myself out of mischief,” he said.