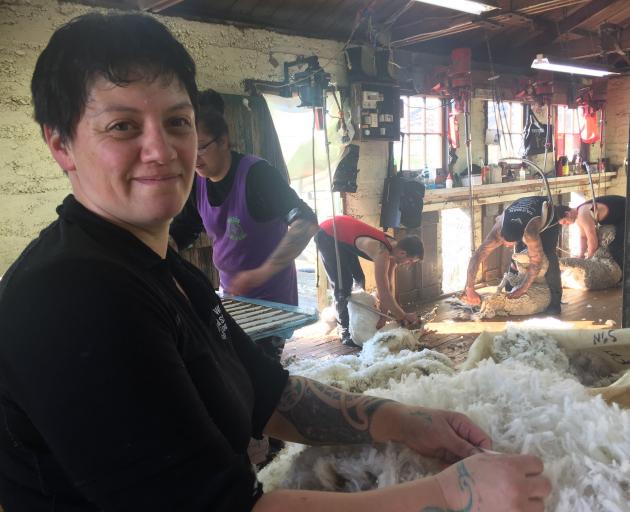 Merinos bleat in the yards, and the shearing machines buzz inside the woolshed as the crew gets to work.

This time of year, she’s chasing the work as well as thinking about upcoming competition as a woolhandler.

"Do I treat the fleece any differently? No. What I do every day in the shed as a wool classer is practice for competition."

Both come down to quality and speed.

Covid-19 has not got in the way of her enthusiasm for her work or the sport. She’s already gearing up for the Waimate Spring Shears on October 9-10, which will have even more prominence this year as a season opener, because of the cancellation of the New Zealand Merino Shears in Alexandra, which were to have been held on October 2-3.

"It’s such a shame it isn’t going to happen this year. These have been tough decisions. It’s the first time in Alex that the show hasn’t gone on (in nearly 60 years), and the fact it’s the only fine wool show, it’s a damn shame that it’s not going ahead."

In the past, during July-August, the Mataura mother, grandmother, wool classer and businesswoman — she is active in the family biz; Elers Shearing started by her late father Bill — would have been off chasing the work in Australia.

The pandemic and being a grandmother had put a stop to overseas travel with her daughter, Maiden, producing three grandchildren in the past five years.

"They come first, so I decided to stay home and chase the local work instead."

This means being only a few hours’ drive away from home so that she would not miss special occasions, like her youngest grandchild Kylo Rey’s first birthday this month, and still be back in the sheds the next day.

The 47-year-old represented the Cook Islands at the World Shearing and Woolhandling championships in Invercargill 2017 with Maiden, then heavily pregnant with her second child. Ms Elers was third in the world individual event and teamed up with Maiden to finish third in the team event.

"Those big competitions, being on the world stage. They’re a whole different story. Bright lights, crowd. You’ve got to learn to overcome it and block it out."

She was hoping to re-partner with Maiden in future events.

"She’s a stay-at-home mum, but she still competes. We work together well as a mother and daughter team. There’s no fighting in that area. In others, yes!

"I probably am the boss in the shed, but it depends on the day. If Maiden’s strong in one area, she just goes for it."

Maiden missed out on going to the World Shearing Championships in France last year because her third pregnancy was too advanced, and was replaced by her aunt Vicky (Smith) in the Cook Island team.

In her downtime she likes to walk 5km a day, and works hard at keeping life in balance while on the road.

"Its just the little things, like making sure you eat right. The shed is physical work — and just doing the normal things, like doing your washing."