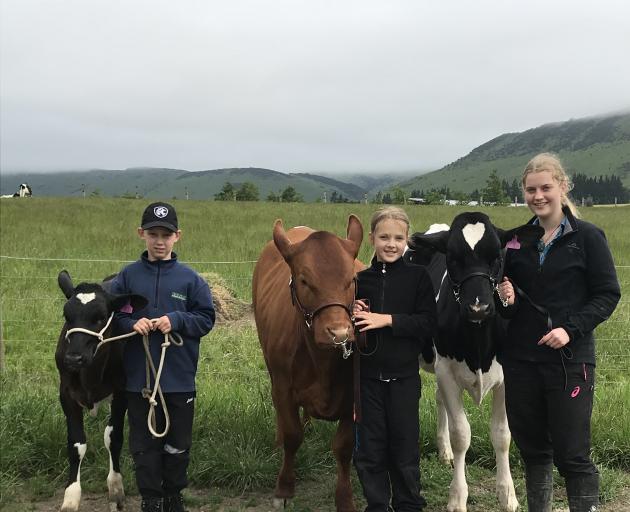 Practising their calf-handling prowess are (from left) Jake Eden, Ebony Eden (both 10, of Balfour) and Emily Agnew (16), of Mataura. Emily borrows calves from the Eden family to take to shows to compete in calf-handling and herdsman competitions. Photo: Supplied
Emily Agnew (16) does not live on a farm, but she is so passionate about dairy farming that she regularly borrows calves to take them to shows to compete in handler competitions.

She and her family have lived in Mataura for the past two years after moving from a dairy farm near Riversdale.

In addition to working as a calf rearer on a dairy farm near Mataura after school and at weekends, she also borrows calves from Julia Eden, of Balfour, to practise on, to prepare for shows.

‘‘I started going to pet corners and I had a little bull calf called Dylz about, maybe, four years ago,’’ she said.

She then moved up to ‘‘black and whites’’.

After the family moved to Mataura, a friend gave her a 4-month-old Friesian called Ziggy.

Later she showed two Holstein Friesians and has competed in shows throughout Southland.

Emily’s next competition is at the Wyndham show and for that she has borrowed Jane, an 11-month-old Holstein Friesian.

She is spending a lot of time at weekends at the Edens’ farm, getting to know Jane and her characteristics.

‘‘We practise and Jane gets used to me.

Part of showing and handling a calf was knowing how to present it, displaying it to its best advantage.

Emily is considering going to Massey University to become a vet, but ‘‘if that doesn’t work out, I would really like to do farming’’.