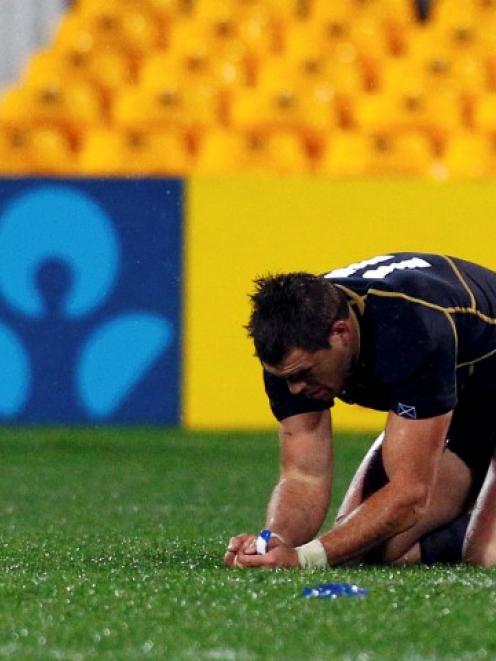 The loss means Scotland must beat England next Saturday at Eden Park to give themselves any chance of qualifying for the quarter-finals, while the Pumas face Georgia next Sunday in Palmerston North.

"I would have to say that it's the most important loss. It makes it very difficult for us now to qualify, although there is still a chance of us qualifying."

Parks missed a late drop goal attempt that would have won the game for Scotland when he was forced on to his weaker left foot by Argentine captain Felipe Contepomi and said Scotland should have probably won the game before that.

"We were in control for most of that match," the 33-year-old added. "We got that six-point lead, switched off for 30 seconds and they score a try.

"They didn't look like scoring all day. To their credit they scored a good try, but we should never have been in that situation."

Many of the Scotland fans in the crowd were booing referee Wayne Barnes by the end of the game, for what they felt was Contepomi's offside position when he pressured Parks on to his weaker foot.

"To be honest, I don't really know," Parks said when he was asked if he felt Contepomi had been offside.

"I just got the ball. I wasn't even expecting to get it then, I thought it was going to be another phase before I got it.

"And obviously, I couldn't take a shot with my right foot or I would have been charged down."

Coach Andy Robinson refused to get drawn on whether he felt Contepomi was offside, preferring to diplomatically accept the decision.

"In all sports there are lots of ifs and buts," he told a news conference. "There are small margins and small calls.

"He (the referee) didn't give the call...we're disappointed he didn't, but that's sport.

"We have all had it go the other way and you win games so you just have to deal with it."

The Argentine captain appeared to concede that he had been lucky.

"Maybe it was the benefit of being the captain and not being penalised for that. I don't know," he said as a slight grin crossed his face.