Scots confident they can break down England defence 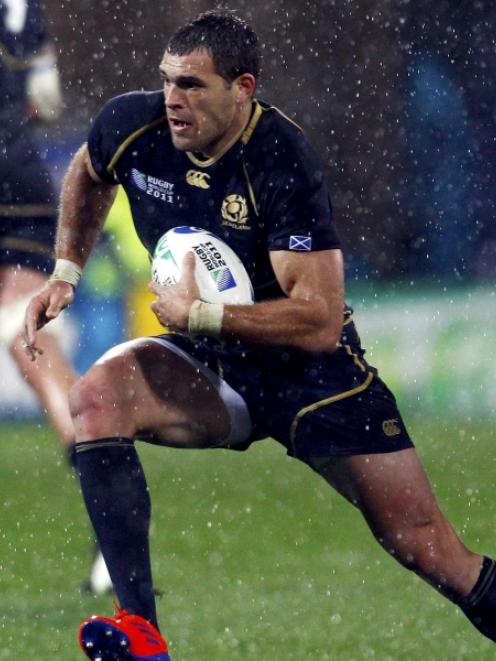 Sean Lamont, part of Scotland's revamped backline. Photo by Reuters.
Scotland are confident they have the weapons to break down one of the meanest defences at the World Cup at Eden Park this weekend and snatch a place in the quarter-finals away from England.

The best chance the Scots have of making sure they do not miss out on the last eight for the first time is to beat England in the Pool B clash by eight or more points and hope Argentina beat Georgia with at least four tries on Sunday.

Despite having scored just one try in their last four meetings with England, the Scots are convinced they have the attacking flair to get behind a defensive line that has conceded only a single try so far.

"Our focus is about going out there and really getting stuck in to the English side and showing what we can do with ball in hand," attack coach Gregor Townsend told Reuters this week.

"I think we've got some really good attacking threats and even despite the conditions I think we have moved the ball well and we'll see what happens in the match."

Scotland are putting their faith in a revamped backline featuring Sean Lamont and Joe Ansbro in the centres, Max Evans and Simon Danielli on the wings as well as Ruaridh Jackson and Mike Blair as the halfback partnership.

The Scots have played a majority of their rugby in the tournament in wet conditions and although the sun shone throughout their training session on the Eden Park pitch on Friday, more rain is forecast for Auckland on Saturday.

"We've got some good exciting backs outside me that I'm hopefully going to unleash," flyhalf Jackson told reporters on Friday. "We'd like to score some tries and hopefully the conditions will work for that."

Although their task against the 2003 world champions is unenviable, the Scots have upset the odds in the past, most notably in 1990 when David Sole's side beat a highly-fancied England team 13-7 at Murrayfield in a Grand Slam decider.

"It's the biggest game for any Scottish international," added Townsend, who won 82 caps for his country. "The players do feel the emotion playing against England. We managed to get one over on them in 1990 and every year we're trying to repeat that."

Coach Andy Robinson wants the Scots to channel those feelings, as well as the bitter disappointment of the last-gasp loss to Argentina last week, into a whirlwind of emotion that could rock the English.

"We've always said we've got to use every emotion," said the former England player and coach. "I really hope it's another cracking test match. For us, it's about finding the answers to breaking down this England team and if we do that, we have the players to finish off."