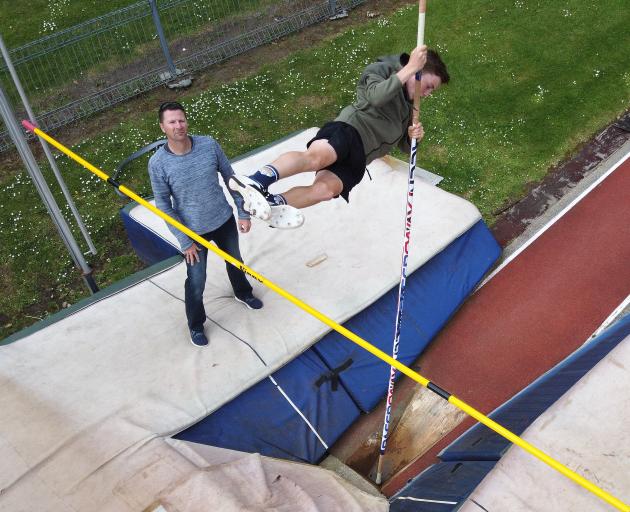 Cole Gibbons goes over the pole while his father and coach Paul watches at the Caledonian Ground yesterday. Photos: Gregor Richardson
The Gibbons family have a knack for the pole vault.

Three generations of the family have been national champions in the event and the youngest of the brigade is now chasing his old man’s record.

Paul’s father, Kevin, was a national champion in the pole vault — national schools championships were not around then — and at 82 is still an interested spectator of the pursuit. 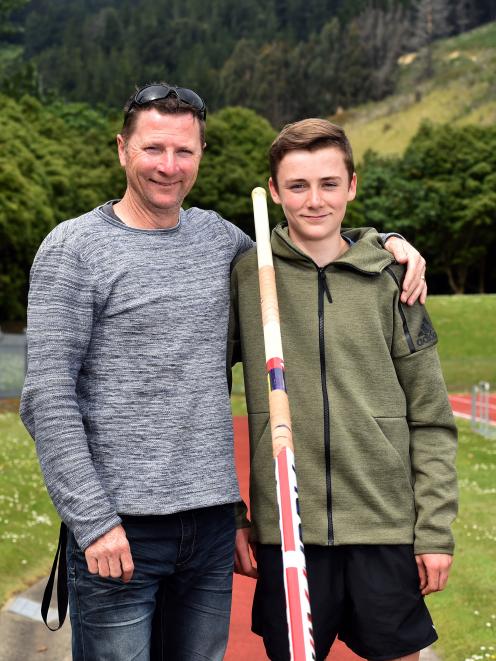 The pair of champions take a break for a photo.
Paul Gibbons went on to set a national record in the event of 5.51m, which still stands today, though he admitted it should have been 15-20cm better. He also still holds the national junior record — under-20 — of 5.40m, which he is more proud of. He went to the Barcelona Olympics in 1992 in the event.

He was drawn to the event through his father and his son is the same.

‘‘It is totally different to anything else. You need a bit of everything. Speed, agility, a lot of technical aspects,’’ Paul said.

‘‘But there is that element of danger about it. To be upside down and be so high.’’

Paul said he did not push his son into the event and he was also doing other events such as hurdles and sprints.

But a group of young Dunedin athletes were now doing the pole vault event, coached by Paul, which was a good sign, and encouraging each other.

Cole said the event was one he enjoyed and he set a personal best when winning in Wellington, vaulting 3.25m, an increase of 15cm from his previous best.

He admitted it took a bit of nerve to get up there, but that was part of the fun.