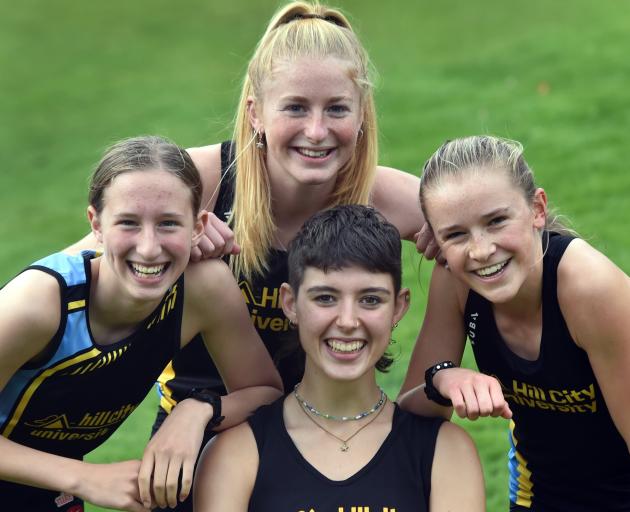 The pair ran the two fastest times of the race to lead the club’s Blue team to an impressive victory.

Geddes started with a brisk 5min 1sec in the 4x1500m relay, and when Liberty McIntyre-Reet (5min 33sec) and youngster Lila Rhodes (5min 27sec) had completed their legs, HCU Blue held a 15sec advantage over Caversham.

Braun then flew home in 5min flat to seal a combined time of 21min 1sec for her team, a whopping 1min 42sec clear of second-placed Caversham.

Becky De La Harpe impressed with a 5min 9sec second leg for Caversham, while Florence Reynolds opened with a 5min 15sec for a Leith team that finished third.

Catherine Lund (Ariki) had the other cracking run of the day, an opening 5min 8sec for Ariki.

Hill City-University was foiled in its attempt to win a seventh straight men’s title.

The Christchurch-based Whippets team made the trip south and, as the name suggests, ran very fast.

David Lee posted the fastest individual time, a stunning 3min 57sec in the fourth leg, as the Whippets posted a time of 24min 37sec in the six-man event.

It was a solid attempt at the record time of 24min 12sec that has stood for 51 years.

HCU Blue put up a good fight to finish second in 26min 39sec, a time highlighted by Ben Wall’s brilliant 3min 59sec in the opening leg.

There was a ding-dong battle in the masters men’s race.

The Leith team of Danny Baillie, Neale McLanahan, Gallien Chanalet-Quercy and Richard Campbell posted a time of 19min 36sec, just 16sec ahead of the HBU team of Simon Rhodes, Mark Geddes and Elliot and Oliver O’Sullivan.