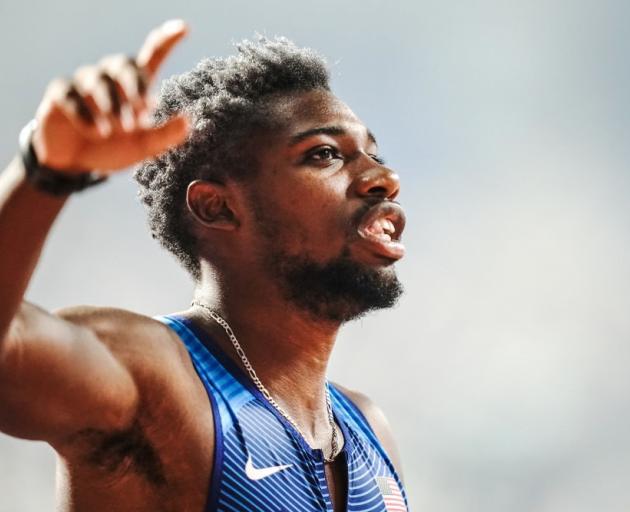 Noah Lyles. Photo: Getty Images
An ambitious attempt to held a high-tech athletics meeting with runners in different stadiums ran into problems when world champion Noah Lyles ran too short a distance in the 200 metres event.

Lyles, running in Florida, completed the race at the Inspiration Games in an eye-watering 18.90 seconds - which would have smashed Usain Bolt's world record of 19.19 seconds and his own personal best time of 19.50.

But, after initial confusion, his official result read "shorter distance" and it appeared that the American had started from the wrong line. Swiss television said he had only run 185 metres.

The race was won by Frenchman Christophe Lemaitre, running in Zurich, in 19.80 seconds, one hundredth of a second ahead of Dutchman Churandy Martina, who was running in the Netherlands.

The meeting was the Zurich Weltklasse's answer to the coronavirus which has prevented conventional events from taking place.

It prided itself on the use of high technology which allowed athletes separated by thousands of kilometres to compete against each other.

"Special times require special approaches and that's what we invented," said Andreas Hediger, the co-director of the Inspiration Games. "We go to the athletes if the athletes cannot come to Zurich."

The starting guns were synchronised and the three runners in each track event shown on a split screen, although slightly different camera angles in the respective venues made it difficult to tell the leader until the finish line came into view.

Felix was racing in California, Miller-Uibo in Florida and Kambundji in Zurich.

"It was very strange, it felt like practice, but not even with the team-mates," Felix said.

"I missed the energy, but any chance to get out here and run I will take it. It was really important to get out there and appreciate the sport. I can't wait until we can compete in person."

Thirty athletes took part in the event which was held in seven stadiums across Europe and North America.